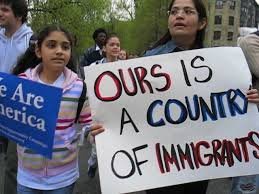 The ACLU of Virginia and 15 other immigrants’ rights and social services organizations [including Virginia Organizing] have joined together to urge Gov. Terry McAuliffe not to accept responsibility on behalf of the Commonwealth for enforcing the federal government’s immigration laws.

In a letter sent to the governor Monday, the groups point out any agreement to do so will take the pressure off of President Donald Trump and Congress to enact comprehensive immigration reform, which is the only solution to the problems associated with today’s badly broken and unworkable system.

Citing a recent executive order signed by the president entitled, “Enhancing Public Safety in the Interior of the United States,” the organizations signing the letter sent to the Governor and copied to Attorney General Mark Herring expressed concern the order will be used to pressure the Commonwealth into helping federal authorities enforce rules of the broken immigration system. No state or federal law requires either state or local governments to do so.

The letter expresses the organizations’ deep concern about “the possible voluntary use of state and local police to enforce federal immigration law, the adverse effect this will have on the relationship of trust between immigrant communities and law enforcement, and possible legal liability for Commonwealth of Virginia law enforcement agencies that investigate, arrest, or detain people on behalf of the federal government. “

It goes on to detail a number of reasons why the governor should not sign any voluntary agreement to accept delegated enforcement authority or share information with federal authorities in the absence of a warrant or court order.

The letter asks the governor to commit publicly to: “i) decline to enter into any 287(g) agreement on behalf of the Commonwealth or any other agreement by which state agencies would voluntarily share information with ICE not pursuant to a warrant or court order; ii) make clear to the public that the Commonwealth of Virginia will not accept voluntarily this responsibility of the federal government; and iii) commit to fight vigorously any effort by the federal government to use threats of loss of federal funds to blackmail Virginia into accepting delegated responsibility to enforce federal immigration law.”