By Sandy Broughton and Holly Paulette 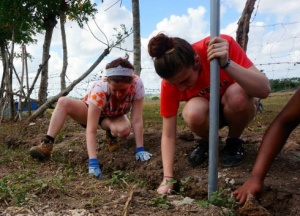 BLACKSBURG, Va., March 7, 2016 – Nicole Selz has a maxim. She worked on it for over a year, honing the words to convey the meaning she so strongly believes in. It is a deceptively simple phrase that speaks volumes to any group or individual concerned with understanding another’s point of view.

“Mere tolerance is adequate to an idle mind, while one who seeks understanding finds unity,” said Selz of Burke, Virginia, a junior majoring in human development in the College of Liberal Arts and Human Sciences.

For Selz, tolerance is not enough. Tolerance, she said, “is like giving up. No one wants to be just tolerated. They want to be understood.” This is an idea she lives each day, as she constantly searches for a deeper understanding of herself and others.

In April 2015, Selz was selected as a recipient of the Division of Student Affairs Aspire! Award, honoring her self-understanding and integrity.

In high school, Selz worked with Operation Understanding and engaged in discussions on stereotyping, prejudice, and privilege. At Virginia Tech, she got involved with Hillel, where she developed as a leader, and became vice president of social justice and community service. She now serves as a Tzedek Collective Fellow for the organization designed to serve Jewish students at Virginia Tech.

Her natural talent for conversation grew into a passion when she was the only first-year student ever selected as an “Ask Big Questions” fellow. Selz facilitates conversations that bring diverse groups together to consider ideas and topics they may not otherwise think about.

“She helps students to recognize their values. She leads by example,” said Sue Kurtz, executive director of Hillel and Selz’s nominator for the Aspire! Award.

Last winter, Selz co-led an interfaith service trip to the Dominican Republic, where students installed 15 home water filters, built 10 gardens, and fenced a baseball field. Her skills in facilitating reflection contributed to the depth of the experience for the group and helped them come to an understanding of ideas they had never considered.

Selz participated in community organizing training through VT Action, and she spent last summer interning for Virginia Organizing, working on issues of social justice and human rights and liberties. She hopes to find a career working with communities to empower them to take on their own issues and affect change.

“No matter how much you think you know about anything – a person, a group, a concept – there is always going to be more to know. You never reach the point of stopping,” said Selz.

Each year, the Division of Student Affairs recognizes 25 students who embody Virginia Tech’sAspirations for Student Learning.

In October, November, February, March, and April, these exceptional students are honored with Aspire! Awards.

Anyone can nominate a student for an Aspire! Award. Nomination information, along with Aspire! Award dates, can be found online.