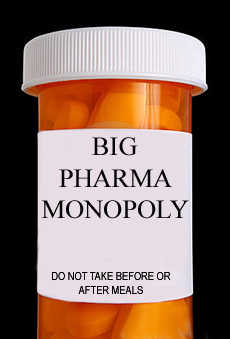 Big Pharma has a new tool to make turbo-charged profits and insulate itself from efforts to rein in skyrocketing health costs. Under the emerging Trans-Pacific Partnership (TPP) free trade agreement with the U.S. and 11 Pacific Rim nations, drug companies will be able to challenge any restraint on their ability to price-gouge, including laws that empower public programs like Medicare and Medicaid to use their purchasing power to obtain lower prices. In the lawless market envisioned by the trade deal, drug makers would charge whatever they want without any constraints. TPP negotiators are currently meeting in Salt Lake City for critical discussions about this agreement, which would be the largest economic trade treaty since the World Trade Organization was established in 1995.

The pharmaceutical companies don't need any help from a trade agreement to make more money. The CEOs of these companies are compensated well for this unprecedented accumulation of corporate wealth. Over the 10 years ending in 2012, the 11 largest global drug companies made an astonishing $711 billion in profits, according to an analysis of corporate filings by Health Care for America Now. The leaders of this handful of companies were paid a combined $1.57 billion during this same period.

The United States Trade Representative is pushing to include policies in the agreement that would prohibit the ability of states and the federal government to get discounts for prescription drugs in the same way that private insurers do. This would apply to all the countries in the TPP and would include existing and future laws. As a result, the TPP agreement could nullify the mechanisms to control pharmaceutical prices that the U.S. already has in place, including state Medicaid rebates and the Affordable Care Act's (ACA) discounts under Medicare Part D.

The TPP could also undermine new initiatives to control costs. For example, a public option for coverage under the ACA wouldn't be able to achieve savings by bargaining over prescription drug prices, and a Medicare savings measure under consideration by Congress might be stopped dead in its tracks. The president's budget proposal includes a measure to allow Medicare to get bulk purchasing discounts just like state Medicaid programs. A similar measure introduced by Sen. Jay Rockefeller (D-WV), the Medicare Drug Savings Act, would save $141 billion over the next 10 years.

Allowing Medicare to spend less would be a far better idea than asking seniors to pay more for their Medicare benefits. Why would the United States trade away our ability to save $141 billion and instead give it to the prescription drug makers? Instead of talking about making seniors pay more for their health care, Congress ought to be talking about how this trade agreement is a disaster for holding down rising medical costs.

Some supporters of the TPP argue that the agreement could exempt Medicare or Medicaid, but the trade representative's proposal, leaked during the early stages of the negotiations, does not spare these programs or others yet to be established. That's why the creation of a public option is such an important example of what could be at risk. The public option is good policy. It increases competition and reduces cost. It shouldn't be preemptively eliminated from discussions about how the ACA could be improved. The idea that Congress should be blocked from taking meaningful action on health care in the future is outrageous.

Unfortunately, it's impossible for the public to follow these negotiations because there's no transparency. The entire process has been conducted behind closed doors and limited to trade officials, except for 600 representatives of the pharmaceutical industry who have been invited to participate.

The proposed policy would work in the following way: Any drug maker from a signatory country could challenge any law or regulation in another signatory country if the company could show the law would limit its profits. So if a drug maker doesn't like a law in another country, it can nullify it by using the trade agreement as a club. For example, New Zealand has among the lowest drug prices in the world. That means that it would be in the interest of every drug company from another country to challenge New Zealand's drug pricing system as an impediment to profit-making under the agreement.

In this example, the company "appealing" New Zealand's law and seeking "relief" would claim that it's a violation of the agreement. The company's challenge would then be adjudicated by an international tribunal. The tribunal would have the power to overrule the law in question, trump New Zealand's sovereignty and impose trade sanctions on the country for failing to abide by the tribunal's rulings. This process would create a lawless global pharmaceutical market and undermine the authority of national governments to regulate corporate behavior.

As it happens, U.S. drug companies in the TPP talks have been sharply critical of New Zealand and have been leading the charge against Pharmac, the agency that manages New Zealand's prescription drug spending.

This issue demonstrates how Big Pharma's drive for excessive profits comes at the expense of pretty much everything else. The purpose of patent exclusivity periods is to encourage research and innovation. But Big Pharma is going in the opposite direction. One half of scientifically innovative drugs approved in the U.S. from 1998 to 2007 resulted from research at universities and biotech firms, not big drug companies. And despite their rhetoric, drug companies spend 19 times more on marketing than on research and development.

Opposition to the U.S. trade representative's pharmaceutical proposal for the TPP isgrowing. Fifteen organizations, including AARP, AFSCME, Consumers Union and other health and advocacy groups, sent President Obama a letter opposing the proposed drug industry rules. Led by Reps. Rosa DeLauro (D-CT) and George Miller (D-CA), more than150 House Democrats signed a letter to President Obama expressing "serious concern" about the fast-tracking of the TPP talks and the lack of congressional input.

Versions of the pharmaceutical proposal being considered by the TPP are already includedin the trade agreement with Australia as well as the agreement with Korea. After TPP, which includes Australia, Brunei, Canada, Chile, Malaysia, Mexico, New Zealand, Peru, Singapore, Vietnam and Japan, the next agreement on the agenda is with the European Union. If this cancer spreads, these trade agreements would eliminate the ability of nations to manage spending on prescription drugs in their public programs and seriously limit government efforts to hold down health cost growth. Governments would be powerless to do anything but pay the exorbitant prices the drug companies charge for their life-saving medicines.

It would be an understatement to say these policies represent the wrong priorities. They elevate the greed of corporations above the best interests of the public. They're undemocratic. They shock the conscience. They must be stopped.

If the Trans-Pacific "free trade" agreement allows drug companies to operate outside and above the laws of nation-states, global corporate interests would be free to undermine our health care system while consumers and governments would be free to do nothing about it.