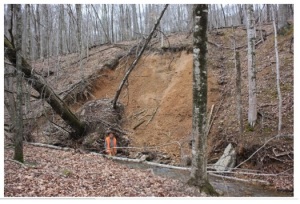 Va. — Federal regulators are taking a favorable view of the huge Atlantic Coast Pipeline. But research by a citizen group has found that they are largely ignoring the risk of landslides. Three quarters of the pipeline’s West Virginia path and nearly 30 percent of its path in Virginia crosses steep and eroding terrain where the ground is likely to give way in places, according to the Dominion Pipeline Monitoring Coalition. Malcolm Cameron, who was a long-time engineer for the Virginia Department of Transportation and is now coordinator of geo-hazards with the coalition, said geologists have mapped thousands of past landslides near the pipeline’s route.“Once it’s completed, they’re going to be in some very vulnerable locations, which can actually impact the structure of the pipe itself,” Cameron said. “And that speaks to the safety to the public.”The Federal Energy Regulatory Commission has so far largely accepted Dominion Energy’s argument that it can avoid problems building on the mountainous and unstable rock and soil. Dominion has said it will use “best in class” construction and mitigation techniques.But Cameron said that when he was working on highway projects, he saw muddy runoff when vegetation was stripped away and heavy equipment was run over the bare ground. But maybe more importantly, studies have documented more than 10,000 past landslides along the route – which, he said, suggests the ground is not stable. The Forest Service found 48 landslides after last summer’s floods, Cameron said. And the U.S. Geological Survey mapped nearly 4,000 in one Virginia county as the result of a single storm in 1969.“They documented 3,800 of those slides in Nelson County from Hurricane Camille,” Cameron said.According to Cameron, FERC is taking Dominion’s promises of smart construction and mitigation on faith. He said as things are going now, no one will have a chance to challenge the company until it already has the permit to start work.“None of this would happen until after FERC issues the approval for the pipeline,” Cameron said. “So there would be no real opportunity for citizen review and comment.”The pipeline is estimated to cost $5 billion and will cross 600 miles, taking Marcellus and Utica gas to markets in eastern Virginia and the Carolinas.