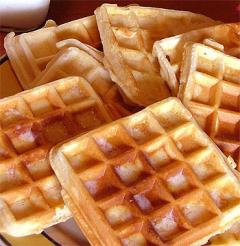 Virginia Beach, VA– With one week left in Governor Tim Kaine’s term, local civil rights and faith-based groups joined together at the Church of the Holy Family Friday morning for a waffle breakfast and to ask the Governor to “Stop Waffling” and sign an executive order granting blanket restoration for former felons in Virginia.

Local residents generated calls into the governor’s office asking him to restore voting rights to most or all of Virginia’s 300,000 individuals who are being denied the right to vote because of a felony conviction.

“Once people have done their time, their voting rights should be restored,” said Virginia Organizing Project member Kathy Early. “On the December 22nd on Ask the Governor radio show, I was disappointed to hear Governor Kaine state that he would not automatically restore rights.  He said, ‘the worse thing we could do, is to confuse people about their rights.’ The current process is what is confusing! Many former felons do not even know where to start. That is why we need Governor Kaine to sign an executive order automatically restoring voting rights.”

Only Virginia and Kentucky permanently disenfranchise all felons upon conviction, requiring an act of the governor to restore voting rights.  Of the forty eight other states, two never remove voting rights and most automatically restore rights upon completion of a prison sentence, parole or probation. Despite having completed their sentences and being released from probation or parole, thousands of Virginians are denied the right to vote, serve on a jury and pursue employment.

Governor Tim Kaine has been asked numerous times during his tenure as Governor to take action to modernize Virginia’s voter restoration procedures.  Advocates are hopeful the he will follow the lead of the Democratic Governor of Iowa and the Republican Governor of Florida, both of whom took executive action in the last few years to reform their state’s felon disfranchisement policies.

Ten Virginia civil rights and faith-based groups have joined together to ask Governor Tim Kaine to issue an executive order that would restore voting rights to most or all of Virginia’s 300,000 individuals who are being denied the right to vote because of a felony conviction, and to put in place a process for automatically restoring rights to others who complete their sentences in the future.

We write to urge you to issue an executive order that will both restore voting rights for most or all felons in Virginia who have completed their sentences and establish a process by which their voting rights will be automatically restored to those who complete their sentences in the future.

Once as much a part of Jim Crow as poll taxes and literacy tests, felon disenfranchisement is no longer tolerated in the United States.  Indeed, only Virginia and Kentucky still permanently disenfranchise all felons, requiring an act of the Governor to restore voting rights.

Virginia’s outdated practice has left unable to vote approximately 300,000 Virginians who have completed their sentences.  These individuals live in our communities and pay taxes, and most have families, jobs and homes, and participate in civic, religious and social organizations.

Because former felons who do not vote are twice as likely to be re-arrested as those who do, felon disfranchisement is a counterproductive policy.  Allowing individuals to vote who have repaid their debt to society makes better citizens and reduces the burden on taxpayers to support the criminal justice system.

Virginia is ready to join the 48 other states that either never remove voting rights or automatically restore voting rights for some or all felons.  A 2006 survey shows that more than 60% of Virginia’s voters favor reform of Virginia’s felon disfranchisement law.   In addition, most of Virginia’s major newspapers have called for felon disenfranchisement reform.  This includes the Roanoke Times, Daily Press, Virginian-Pilot, Washington Post and the Staunton News Leader.  We do not know of any newspaper that opposes reform.

In the last few years the Governor of Iowa, a Democrat, and the Governor of Florida, a Republican, have issued executive orders modernizing their state’s felon disfranchisement policies.  If Kentucky reforms its felon disfranchisement law, Virginia will be the last state in the nation still clinging to this shameful, anachronistic, and ineffective policy.

Most of us have met with you or your staff in recent weeks to discuss an executive order.  We appreciate the numerous opportunities you have afforded us to engage in this important dialogue, and we understand that you are concerned about how an executive order would be implemented in Virginia.

Today we ask you to look beyond whatever minor obstacles lie before you and to act on the principles that have guided you in your distinguished career as an elected official by issuing an executive order automatically restoring voting rights for all or most of Virginia’s former felons once they have completed their sentences, parole or probation.

We thank you for your attention to this important matter.

League of Women Voters of Virginia

For more information on felon disenfranchisement in Virginia , visit www.restoreourvote.org.