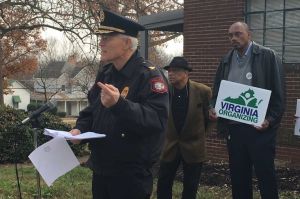 Members of both the Danville Police Department and Virginia Organizing announced expansions in availability of citizen complaint forms and highlighted the process during a news conference Wednesday.

“Personally, I am pleased a year of conversations has led to this moment,” Danville resident and local Virginia Organizing member Ebony Guy said.

Guy, who has been working in civil rights for more than 18 years, said she became passionate about police and community relations in 2013. She began wondering what she could do to make sure police were just as accountable as the people they were serving. Additionally, she began to think about her young son.

“While I teach him to respect law enforcement, I wonder what I can do to protect him from becoming another Trayvon Martin, Tamir Rice or Jordan Davis,” Guy said.

After several talks with Danville police beginning in 2014, Guy said the complaint process was one of the biggest issues discussed.

Speaking after Guy, Danville Police Chief Philip Broadfoot said the department has a rigorous internal process for handing and evaluating complaints. For several years, complaint forms have been available both on the police department website and at the department.

“We are happy to work with Virginia Organizing to talk about our complaint process and inform everyone in the community about how to make a complaint,” he said.

Complaint forms now will be available at several other locations in the city, including the Boys and Girls Club of the Danville Area and First State Bank, said fellow local Virginia Organizing member Lashawn Farmer. Farmer said the complaint process makes sure all parties — both citizens and the police — are held accountable.

“It is important that the community is given transparency when it comes to the local police department,” Farmer said.