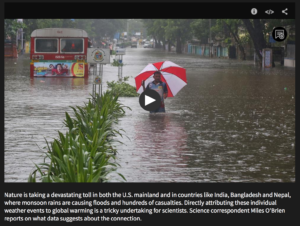 MILES O’BRIEN: And the Associated Press now confirms that the death toll from Harvey has risen to 12.

But as we focus on Texas and Louisiana, nature is also taking a devastating toll elsewhere. Heavy monsoons are paralyzing Mumbai, India, right now. More than 1,200 people have died so far.

Connecting the dots between a global warming and extreme weather is not a simple job for science.

That is the topic of our Leading Edge segment this week.

Scientists are loathe to get ahead of their data, but what they see in Houston fits like a key piece in a giant complex puzzle.

MILES O’BRIEN: Kerry Emanuel is a professor of atmospheric science at the Massachusetts Institute of Technology.

KERRY EMANUEL: We have a lot of extreme weather events. Whether or not the climate changes, to attribute a particular event to climate change is next to impossible.

RADLEY HORTON, Columbia University: Because, for those really rare events, it’s hard to even know how common they are before you get to climate change.

MARSHALL SHEPHERD, University of Georgia: I’m very uncomfortable talking about causation of one particular storm, in the same way that I can’t identify what particular home run was hit by a baseball player because of steroid use.

MILES O’BRIEN: Marshall Shepherd is a professor of geography and atmospheric sciences at the University of Georgia.

MILES O’BRIEN: So, let’s begin on the firmer ground, the facts. Over the past hundred years, global temperatures have risen 1.5 degrees Fahrenheit, and global sea level has risen about eight inches. No dispute about that.

RADLEY HORTON: It doesn’t sound like much, but for a lot of the coastal cities in the U.S., places like Norfolk, Virginia, we’re already seeing much more frequent nuisance flooding events.

MILES O’BRIEN: And, in fact, while our eyes have been fixed on Texas and Louisiana this week, large parts of Norfolk are underwater because of a run-of-the-mill tropical system. And in India, monsoon rains caused floods that killed 1,000.

RADLEY HORTON: We’re getting high water along the coast when there’s no storm at all, water levels that used to happen maybe once every decade or so happening every couple of years.

MILES O’BRIEN: And while the atmospheric temperature has increased, the real heating has occurred in the oceans. And warm water is like high-octane fuel for a hurricane.

RADLEY HORTON: Once those upper ocean temperatures, especially near the surface, get to about 80 degrees Fahrenheit or warmer, you now have a source of warm, moist air. That is the fundamental fuel of a hurricane.

MILES O’BRIEN: This is where the science gets a little bit harder. Does this warmer water necessarily mean that there will be more powerful hurricanes?

KERRY EMANUEL: What all the models and theories seem to agree on, at least globally, at this point is that the frequency of the very high intensity, Category 3 or 4 or 4 events, should go up.

If you look at the most powerful hurricanes on the planet, they have winds near the surface of about 200 Miles per hour. It’s conceivable that, 100 years from now, the top-ranking hurricanes will have wind speeds of, say, 220 miles per hour, OK, about a 10 percent increase.

MILES O’BRIEN: Scary and foreboding as that is, the strength of a hurricane is just part of the picture. A warmer climate means more moisture in the air, and that is leading to more rainfall.

RADLEY HORTON: Even if the hurricane strengths stay the same, we will probably see more rainfall in those hurricanes in the future, because the upper oceans are going to be warmer, because that warmer atmosphere can hold more moisture. That means that, even if the storm strength is the same, you will probably see a little more rainfall occurring during those powerful hurricanes.

MARSHALL SHEPHERD: We’re seeing quite a bit of urban flooding around the world, and particularly in this country, many of our storm water management and built environment infrastructure is developed for what I call the 1950s rainstorm.

MILES O’BRIEN: We have built our civilization right to the edge of safety for a very specific, and until recently, very stable climate.

MARSHALL SHEPHERD: There’s something called stationarity. And what that essentially means is that storm water management, roads, building design, built infrastructure, assume that the intensity of rainfall would basically stay the same forever.

And what we’re seeing in the scientific literature is that the most intense rainstorms are now more intense, and this overwhelms that built infrastructure.

Going forward, I think the built environment infrastructure planning, engineering communities will have to increasingly consider these weather and climatic changes in their design.

MILES O’BRIEN: But 10 days before Harvey hit Houston, the Trump administration moved in the opposite direction, overturning an Obama era rule that federal projects be designed to account for the risk posed by climate change.

RADLEY HORTON: We see that when those climate models are run in the future, with those higher greenhouse gas concentrations, we see more extreme events of certain types, more heat waves, more heavy rain events and more frequent coastal flooding.

KERRY EMANUEL: We’re inside the experiment. It’s the largest experiment we have ever done on the Earth system, for sure.

MILES O’BRIEN: We produced that story in conjunction with PBS NOVA and the online weather app MyRadar, part of an upcoming series on the link between weather and climate.