Home » The Issues » Climate/Environment » Doctors: New Smog Rules Could “Save Thousands of Lives”

Doctors: New Smog Rules Could “Save Thousands of Lives” 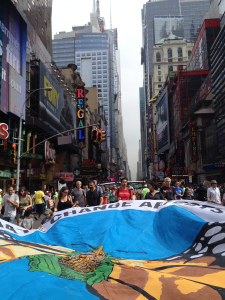 Originally posted on the Public News Service on February 2, 2015

The Environmental Protection Agency (EPA) is now taking comments on its ozone regulations, which haven’t been updated since 2008.

And he says that could save nearly 8,000 lives a year.

The American Petroleum Institute counters that a lower ozone level would be too expensive.

But Benjamin says health problems and deaths cost much more.

“The science tells us that we save more lives if we bring the number down lower,” he stresses. “And the argument that it’s going to cost all of this money to do it, we hear that every time we try to lower the numbers. And history tells us that is just not true.”

The EPA is wrapping up public hearings on the proposal this week and is taking written comments through mid-March.

Ozone comes from tailpipe and smokestack emissions. In the air, it turns into smog and causes inflammation and irritation in the lungs, which Dr. Dona Upson, a pulmonary physician and associate professor at the University of New Mexico, says can be life-threatening for people with respiratory problems.

Upson points out the tougher ozone standard is now well within reach.

“Vehicle emission standards, gasoline standards, things that can impact the ozone level in a good way,” she says. “This is a good time now to get the best standard that we have evidence for.”

Last year, 11 counties in Virginia got failing grades for ozone pollution, according to the American Lung Association – where Paul Billings, the association’s senior vice-president for advocacy and education, says the health effects are surprisingly widespread.

“Especially people with asthma, chronic obstructive pulmonary disease, heart disease – children, seniors,” he states. “Someone in every family is impacted by air pollution, and setting a strong standard will really help protect their health.”