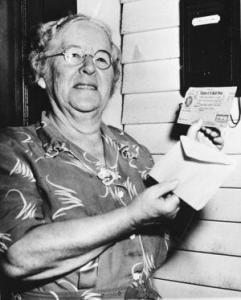 Published in the Roanoke Times. Sandra A. Cook is the Chairperson for Virginia Organizing, a non-partisan statewide grassroots organization.

On Jan. 31, 1940, Ida M. Fuller became the first person to receive monthly Social Security retirement benefits. Since that time, American citizens have been working hard to pay into the Social Security system knowing that when they retire, or if they become physically unable to work, money will be there for them.

This program is so popular because it provides economic security among people working jobs that are not set up to provide that security. When individuals are working long hours or multiple jobs to make ends meet, there is not a lot of room for saving for retirement.

Thankfully, Social Security allows elderly people to stop working after many years of contributing to our society.

But Social Security is not just for those who have struggled to survive on limited income. In the early 2000’s when the United States hit a recession, millions of people lost economic security in the private market. Banks gambled with their retirements — and lost their money. We, the American people, are still recovering from the devastating losses in the stock market during that time. (On the other hand, the banks that played fast and loose with our investments are doing fine and their executives who made those decisions are still among the nation’s wealthiest).

Because we have Social Security, many Americans were protected from absolute financial ruin due to the unscrupulous practices of banks taking advantage of limited government oversight and regulation. Contrary to the private-sector retirement market that shifts and is not guaranteed, Social Security has a public accountability mechanism through our electoral system.

This is why we must call on lawmakers to protect and expand Social Security in the public trust. Americans cannot afford to be at the mercy of banks with no safety net. Americans cannot achieve economic security placing bets in a market that does not consider our interests or our needs.

We need our elected officials in Washington, D.C. to take a stand and support the hard-working Americans trying to provide for our families. We need them to fight for the American dream for all of us, not just the wealthiest.

When U.S. Sen.Mark Warner voted against a budget amendment that would have required a more careful review from senators before the Social Security program could be altered, it was a vote that got my attention. It also got my attention that he later voted to expand the program during a budget hearing that same night. I’m proud that Warner wants to expand Social Security, but concerned that he might not be doing everything within his power to protect the program and make sure that Virginia’s families won’t suffer as a result.

I know there are a lot of really smart economists working on Social Security, but everyone should realize that it’s a program that is working for Americans and might not need as much fixing as some think. If we are going to make changes, let’s focus on increasing benefits to keep seniors and people with disabilities out of poverty.

We fought so hard to gain some kind of economic security that came in the form of Social Security and Medicare. Let’s not go back to a time when corporations and the private stock market dictated whether our seniors could afford to eat. Living on Social Security is hard enough; let’s not make it harder.

Sen. Warner, what will you do to ensure our seniors are protected and won’t have their benefits reduced?