Home » The Issues » Civic Engagement » Downie: What is the Electoral College and Why Does it Matter?

Downie: What is the Electoral College and Why Does it Matter? 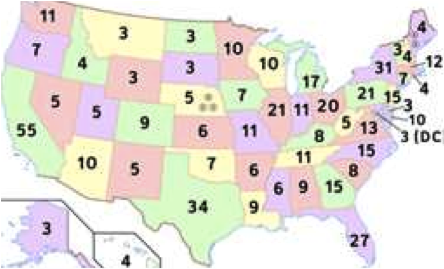 The term "electoral college" is not in the Constitution, but the term came into use in the early 1800s as the unofficial term for the group of citizens who cast votes to elect the President and Vice President of the United States. As you know, ourpresident and vice president are not chosen by popular vote; rather we choose other people—“electors”—to choose these leaders for us. These electors, who have one vote each, serve in the electoral college for the sole purpose of electing the President and Vice President of the United States. Each state has the same number of electors as they have representatives in Congress, and that number is based on population.

No state, no matter how small in population, has less than three electors—Alaska, Delaware, Montana, North and South Dakota, Vermont, Wyoming and Washington DC all have three electors (or three votes each).

Why do we have an Electoral College?

The first reason is that the founders did not trust the people at large to make the right decision. In the words of Alexander Hamilton the people might not be capable of “analyzing the qualities adapted to the station” of n President, or might easily “be manipulated by tyrants.”  Instead, as The Federalist Papers say, such a weighty responsibility should be vested in, “a smallnumber of persons, selected by their fellow-citizens…[who] will bemost likely to possess the information and discernment requisite to suchcomplicated investigations.”

The second reason for having the electoral college was to give more power to small states who were concerned that they would have little power in popular elections  Mark Shulman of History Central points out that, in the last presidential election, each of Wyoming’s three electoral votes represented 70,000 votes cast by the people of Wyoming (a total of 210,000 votes were cast). While, in California, where almost 10 million votes were cast, an electoral vote represented 179,000 Californians—an “obvious advantage for the smaller state,” says Shulman.

This factsheet was written by Fredericksburg Virginia Organizing Leader Ginny Downie for her website: