Home » The Issues » Health Care » Dr. Lillis: Have you been feeling the creep?

Dr. Lillis: Have you been feeling the creep? 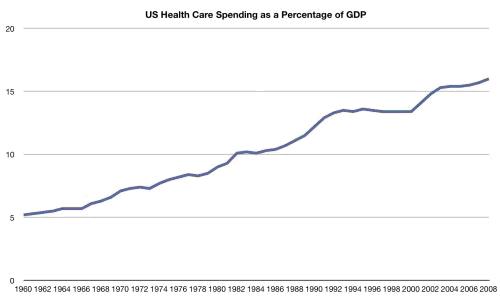 It’s December again, which means many of us are about to see changes in our health insurance policies.  Unfortunately, the picture this year isn’t pretty.  Some surveys concluded that health insurance premiums rose again by 13% this year.

Opponents of the Patient Protection and Affordable Care Act (PPACA)– passed in March 2010 – would have you believe that rising premiums are to be blamed on this historic piece of legislation.  However, if you have eyes, you will be able to see from the graph above that health care spending and costs have been rising from 1960.  In 1960, neither Harry Reid, nor Nancy Pelosi had entered politics, and Barack Obama was one year old.   Somehow I doubt the narrative opponents are trying to spin.

As usual, we need to look at the facts.  The Kaiser Family Foundation conducted a study looking at employment-based insurance, and found that between 2000 – 2010, health insurance premiums have risen by 114% and the worker’s contribution towards those costs have risen by 147%.  More workers are being shifted to high-deductible insurance plans, and 27% of workers now have a deductible over $1000 a year.  Oh, by the way, the smallest increase in premiums during the time period studied was between 2009-2010 – between 3-5%.

The Commonwealth Fund  found similar data, but also looked at how much faster premiums are rising compared to household income.    Rising health care costs and skyrocketing deductibles for eroding health coverage, coupled with the slow growth in real income that we have seen in the US over the last 10 years has the potential to cause a crisis for the middle class.

Make no mistake.  Both outstanding studies confirm a trend in rising costs long before the enactment of the new health law in March 2010.  And that’s the point – the Commonwealth Fund concluded that the PPACA has great potential to slow the growth of premium increases, and regulate minimum benefits offered in health insurance policies.  So, be careful who you believe.

If you want to know why health insurance premiums are relentlessly creeping up, don’t blame the PPACA.  Reasons are abundant – look at medical utilization, the games played in healthcare pricing, and my personal favorite, health insurance company profits.

Crossposted from Progress Notes a Doctors for America Blog. Dr. Chris Lillis is a Fredericksburg resident and member of the Virginia Organizing Health Care Committee.