Home » The Issues » Education Rates Are Up, but So Is Poverty

Education Rates Are Up, but So Is Poverty

Virginians are rightfully proud of the fact that we’re a highly educated and hard-working state. But Virginians also deserve to be fairly compensated for that hard work. Instead, even as their level of investment in their skills and future is increasing, more are living on incomes that are too low to make ends meet.

Virginia’s workforce is far better educated today than when this century started, and that’s the case in almost every corner of the state. Over 6 in 10 Virginians over the age of 25 now have at least some college education, and over a third have completed a bachelor’s degree or more. Those rates are far higher than the nation’s as a whole.

Usually, a higher education is a ticket to a bigger paycheck, and vice versa. But in fact, many of Virginia’s lowest-paid workers actually went pretty far in school. Almost 4 in 10 of the 240,000 Virginians who make under $8.25 an hour have at least some college education. Unfortunately, graduating from high school and going to college is no guarantee in the current difficult economy of being able to find a decent job.

For Virginians with less than a college education, falling wages and the lack of enough jobs across the state means that far more Virginians are struggling with incomes below the poverty line than in 2000.

And they’re not concentrated in just a few places either. In 76 of the 79 Virginia localities for which data is available, the number of people living in poverty was higher in the 2011-2013 period than in 2000. The largest increases in sheer numbers have been in large suburban counties. Fairfax, Henrico, and Prince William counties all have over 15,000 more poor residents now than they did in 2000.

York County and Salem are different in a lot of ways and are hundreds of miles away from each other, but they both have seen their poverty rates more than double since 2000, despite the rising educational attainment of their residents overall. 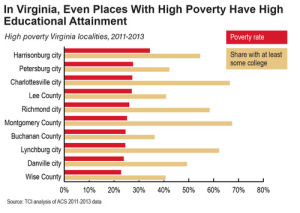 As Virginia’s lawmakers continue to deal with the state’s budget problems, they should keep in mind that hard working Virginians all across the state are doing their part to position themselves for success, but the rising tide is very slow coming in.

Click Here for the original article by The Half Street