Home » The Issues » Economic Justice » Ehrenthal: Pepper Spray is Not Food and Occupy is Not Ambiguous

Ehrenthal: Pepper Spray is Not Food and Occupy is Not Ambiguous 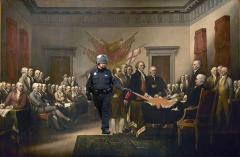 As Yogi Berra is purported to have said, “It’s like Deja Vous all over again”.  Watching the treatment of those assembling in protest for the Occupy movement brings me back to the late 1960s and early 1970s.  We seem to have learned nothing about how to treat relatively peaceful groups expressing their concerns. In the 60’s and 70’s it was integration and the war. The seemingly indiscriminate use of pepper spray to quell a peaceful crowd because the local government were tired of watching the crowds displaying their constitutional right to free speech and peaceful assembly.

The newspaper editorials and television pundits are not sure how to handle both the protests and the police reactions.  It seems that some in the media are trying to paint the police brutality as an act of confusion against a backdrop of ambiguity. It’s as if they are saying that as long as Occupy appears disorganized, they deserve what they get. “Whose to be held accountable in the ‘chaos?’” Fox’s Megan Kelly even went so far as to call pepper spray a harmless food item.

So, how is it that anyone could see a video of peaceful UC Davis students getting pepper sprayed and feel that it is justified? Part of the problem is that many are confused about what the Occupy movement represents. I hear and read over and over again, “We don’t what these demonstrators hope to accomplish?” But, is that confusion warranted or just an attempt not to listen to what they have to say?

I don’t pretend to speak for any of them but I feel that I understand the basic underpinnings of the movement. They appear to want a change both in the economic actions of large corporations and significant change in our political system. Critics of the Occupy movement charge that they are not specific enough in their complaints.  Well, from my well-lit and safe writing post, I can understand their list of complaints loud and clear.

This is my understanding of the utmost concerns of the Occupy movement:

Big banks and corporations are not paying their fair share. Corporations are only concerned about their “bottom line” and totally ignore the consequences of their decisions and actions.  Too many companies have destroyed jobs in the US for what the hope to be greater profits by moving overseas.  They move jobs, and they move assets and corporate headquarters so that they won’t pay corporate taxes.

Corporations and big banks have too much influence over our government. A huge art of the problem is the tremendous influence of money in politics. Too many of our political leaders insulate themselves, in many ways, so that they seemingly hold office forever.  It seems to me that we have developed a “ruling” class in this country (and its true in both political parties). I don’t just mean paying for campaigns and expecting influence.  The huge numbers of lobbyists in all capital cities and the revolving door of those who work in government and then become employed by companies they once dealt with while in government. These real complaints have led to paralysis in governing.  Too many of our decision makers, in government are beholden to too few people.

Our economy (and government) does not always work for the 99%. When the financial system imploded in 2007 and 2008, our elected officials jumped to “bail” them out.  But when millions of people, after losing their jobs could no longer pay for their shelter, the Administration and the Congress turned a deaf ear.  When millions of job evaporated there was no one left to pay the cost of government.  So the solution was to lower the taxes on those who had jobs.  Just how was that going fund the government and its three wars?  I know that this sounds silly, but the war in Iraq and the war in Afghanistan have lasted almost ten years and are costly in lives and money. We have fought a failed war on drugs for twenty years and we’re still paying for that while education and health care suffer.

What do the demonstrators want?  Bravely and honestly facing some of the above issues might give us all an answer.