Elected Leaders Should Keep Their Word 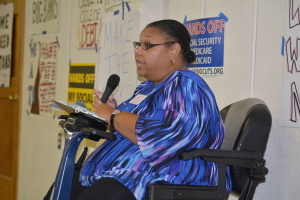 Virginia Attorney General Mark Herring made a promise to constituents in October 2015 that we’d like him to keep. Back in October, the Attorney General was the keynote speaker for Virginia Organizing’s annual Grassroots Gathering and 20th Anniversary Celebration. I introduced him and talked about the great work he has done as our Attorney General.

At this meeting, Matt Bailey and Johnny Mayo stood and told their stories about experience with racial profiling in Danville. These Virginia Organizing leaders have been working with their local police chief to make changes and believe that our localities should be collecting data to understand the scope of racial profiling and develop strategies to combat this problem. Matt and Johnny asked if Attorney General Herring would be willing to meet with ten police chiefs across Virginia that Virginia Organizing brings to the table to share best practices for data collection.

In Lynchburg last month, Herring told one of our leaders that he would absolutely set that meeting and we should just call his scheduler. Virginia Organizing called — no response. Our leaders made about 200 phone calls to his office — no response. Virginia Organizing has sent 18 official requests by email to Attorney General Herring, and, just like other attempts to communicate, we did not get a response.

When police chiefs are willing to meet to talk about this important issue and ensure that Virginia’s communities are safe for all people, we should all be willing to contribute in any way we can to work for racial justice.

Sandra A. Cook is the former Chairperson of Virginia Organizing and currently serves on the State Governing Board.