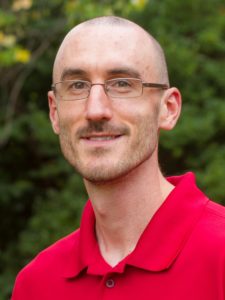 Eric Olson-Getty came to Virginia from North Carolina in 2014. He moved for a new church—his wife is a pastor of a Mennonite congregation—but got to Harrisonburg looking for a new grassroots organization too. After being a part of Durham CAN, an affiliate of the Industrial Areas Foundation, Eric knew that he wanted community organizing to be a part of his life in Harrisonburg.

“When I walked in the door and saw that Virginia Organizing was working on issues I cared about, it was a no-brainer and I just plugged in,” said Eric.

After joining the tail end of the chapter’s diversity in hiring campaign, Eric got more involved around the issues of immigration reform and policing. In these campaigns, he has worked to support communities of color—and his fellow members—as a white ally. In this role, Eric has found a place in the Harrisonburg Chapter.

“For more privileged members of chapters, take direction and don’t take charge. Listen to and respect the leadership of people of color. In the Harrisonburg Chapter, I found people I could learn from and follow.”

Eric sees the work of Virginia Organizing as especially timely in 2017.

“I’m excited about the strengthening of community ties and bridges of solidarity,” said Eric. “Given the current political context, communities are under attack and people are at risk in a way they haven’t been in a while. Community organizations like Virginia Organizing are in a good position to pull people together to make a plan, make a change, and have each other’s back.”

Thank you, Eric, for building a more just Virginia!