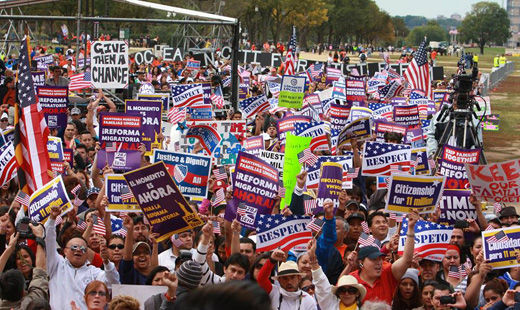 Last November, 4 immigration reform activists gathered at the Capitol to begin a 22-day fast. Eliseo Medina, Cristian Avila, Rudy Lopez, and DJ Yoonwere joined by hundreds of supporters of "Fast for Families: A Call for Immigration Reform", to appeal to Congress for an end to the harmful immigration practices that continue to shatter innocent families that came to the U.S. looking for a better life. Other supporters fasted for shorter periods of time and there were solidarity fasts in many cities.

The November actions gave rise to the Fast for Families bus tour that began January 27th, with fasters and activists visiting 67 key congressional districts to lobby for immigration reform. On February 24th, two buses, one with a northern route, the other covering the south departed from L.A. to visit 70 cities, ending up in Washington D.C. on April 9th. Not only Latino, but also Asian and Pacific Islander immigrants lead the tour, bringing attention to less publicized groups of immigrants being affected by Congress's inaction on immigration reform.

April 2, the two buses met and joined local faith and immigration reform leaders and activists in Richmond, VA, House Majority Eric Cantor's district. They erected tents and began a four-day fast to be accompanied by events, rallies, and community meetings to send the message that we cannot wait any longer for reform. In opening remarks at a rally April 3, Reverend Tony Suarez pointed out that immigrants built our country. "Immigration is not a new issue in this land. Our forefathers were dreamers who came to this country."

After the rally, a small group of activists moved on to Virginia GOP headquarters to meet with staffers about comprehensive immigration reform. " We're asking him (Rep. Cantor) to sit down and talk to us about this broken immigration system and we hope that we can touch his heart to make him understand that he has a unique power to end the suffering of our community of immigrants" said organizer and faster Eliseo Medina. One staffer was moved by the fasters' commitment to change people's hearts and minds about immigration reform. "Conservatives aren't driven by hate. We're struggling with how to make the system more moral."