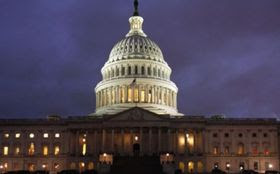 A proposal for how Congress should handle tax and spending questions could bring automatic cuts to Social Security and Medicare. (Martin Falbisoner/Wikipedia)

Va. — New budget rules proposed for Congress could bring deep, automatic cuts to benefit programs for seniors that had been exempt from those kinds of cuts until now. House budget chair Tom Price, R-Ga., has said he would like to see reductions in Social Security and Medicare benefits. David Reich, senior fellow at the Center on Budget and Policy Priorities, said Price has proposed strict caps on all spending, that would kick in if the deficit goes up – even if it’s the result of tax cuts. Reich said that, unlike past budget battles, it looks like Price wants Social Security and Medicare to be on the chopping block.“What if Congress decides to enact large additional tax cuts? His document says we really shouldn’t exempt anything,” Reich said.Price opposes many kinds of federal spending and has said the government cannot afford its current programs. President-elect Donald Trump selected Price to be his Secretary of Health and Human Services.Reich said Price’s proposal strongly favors tax cuts – even to the extent of possibly cutting benefits for seniors to pay for them. Medicare and Social Security are both popular programs with their own dedicated revenue streams. As a result, they have been largely exempt from recent congressional tax and spending fights. And Reich said that under the current “pay as you go” budget rules, Congress does not allow itself to increase spending or cut taxes without offsetting the cost.But Price would break both precedents.“In place of that, he has this whole series of restrictions on spending only,” Reich said. “None of them operate on the revenue side at all.”Trump has said he wants to cut corporate and individual taxes. Analysts have said his plan would increase the deficit while primarily benefiting the wealthy. Trump also has said he would oppose cuts to Social Security benefits. But Reich said one problem with automatic reductions is that they bypass much of the normal debate.“You wouldn’t say, ‘Well, this is how we want to change Medicare’ or ‘how we want to change Medicaid’ or veterans benefits,” he said. “And indeed the limits could be set very low to try to force reductions.”It’s unclear what will happen to Price’s proposed legislation if he moves to the executive branch. Reich said that in any case, it will likely face opposition in the Senate.More on Reich’s assessment of Price’s proposal is available here.