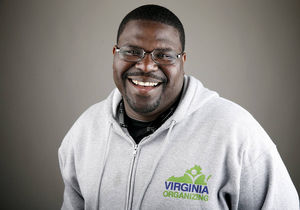 Duane Edwards had been out of prison for two years at the time of the 2008 presidential election.

He was excited about the historic candidacy of Barack Obama, who went on to become the country’s first black president. But he still could not vote after serving nearly four years behind  bars on a 2003 robbery conviction in Spotsylvania County.

In the state’s eyes, he was a violent felon.

Still, Edwards said he was determined to get involved in the election. So he volunteered for the Obama campaign twice a week—making phone calls, knocking on doors and manning an  informational booth at the mall.

This year, for the first time since he was released from prison on Dec. 13, 2006, Edwards will finally cast a ballot for president. Just last year, Gov. Terry McAuliffe restored his rights.

Edwards is also working to help other ex-convicts register to vote in the wake of McAuliffe’s recent order restoring the rights of 206,000 former felons.

He joined the grassroots group Virginia Organizing several years ago, and in 2014 helped facilitate a restoration of rights workshop hosted by the organization. At the time, he was in the process of completing a 13-page restoration application that required three letters of recommendation.

But the former felons impacted by McAuliffe’s order simply have to fill out a one-page voter registration application. Edwards said he’s handed out at least 15 of the forms during visits to barber shops and beauty salons in the Fredericksburg area.

“It just didn’t make sense for individuals to get locked up, do something wrong … do their time, pay their fines and you’re still treated as if you’re still that bad person who made that one mistake,” Edwards said.

The Washington-based Sentencing Project said restrictive voting laws disproportionately affect African–Americans. Virginia is among three states where more than one in five black adults can’t vote, according to the group.

Edwards, who is black, and other members of Virginia Organizing joined McAuliffe when he signed the order April 22.

Republicans in the General Assembly have roundly criticized the move as an attempt to garner votes for Democratic presidential contender Hillary Clinton. They hired a high-powered attorney to challenge the action.

House Speaker Bill Howell, R–Stafford County, said in a prepared statement that the governor had taken an “unprecedented view of executive authority and exceeded the powers granted to him by the Constitution of Virginia.”

In an email to supporters, state Sen. Bryce Reeves, R–Spotsylvania, wrote that McAuliffe’s order was an “illegitimate and unlawful use of executive power” to “ensure his longtime friend, Hillary Clinton, becomes the next president of the United States.”

“They’re giving 200,000 people that have been convicted of heinous crimes, horrible crimes, the worst crimes, the right to vote,” Trump said during a campaign rally last month in Rhode Island.

Edwards said he doesn’t care who an ex-felon votes for, adding that people would be surprised to learn how many of them are “hardcore Republicans.” He declined to say which presidential candidate he supports.

“These votes are out there for everybody to get,” Edwards said.

He said he was talking to his mother about the order recently when a stranger chimed in: “Are you saying that a murderer is going to be able to vote now?”

Edwards said he acknowledged that was possible. But he notes that there are plenty of other felonies aside from murder or rape, including drug possession and embezzlement.

Edwards attributes his crime to a lack of understanding about how the world works.

He joined the Army after graduating from Courtland High School, but was discharged after just two years. He said he was hoping to go to college in Tennessee—possibly as a walk-on football player—but didn’t know how to pay for it.

He said he thought at the time that he would have to pay everything up front.

“That’s when …” he said, not finishing the sentence. “It was almost like you’re doing something bad to do something good.”

He pleaded guilty to robbery. He faced other charges, including using a firearm while committing a felony, but they were dismissed.

Since then, Edwards has turned his life over to Jesus Christ, said Trinity Fellowship International Pastor Timothy Jackson. Edwards is a deacon at the church, where he also mentors children.

“A lot of his mistakes, he learned from them, and he’s helping others not to go down the road he went through,” Jackson said.

Jackson’s wife, Sandra, said she knows Edwards as a loving father and husband—not a violent criminal.

While in prison, Edwards received an associate degree in early childhood education through a distance learning program. He later got a bachelor’s degree in biblical studies.

“For a long time, I found myself being part of the problem,” he said. “Now I want to be more part of the solution.”

But his felony conviction has been a roadblock to employment. He said a company wanted to hire him as a youth counselor, but the state Department of Behavioral Health and Development Services determined he was ineligible for the vocation.

He said he yearns for a day when society will totally forgive reformed felons like himself. The country was built on second chances, Edwards said.

“If you go back in history, nobody would be over here if there wasn’t a second chance.”