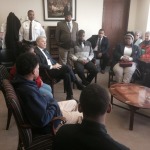 Originally posted by the Roanoke Times on February 25, 2015.

RICHMOND — Virginia legislators on Thursday plowed through a blizzard of bills in an effort to adjourn on time Saturday, if not sooner.

Here are some highlights:

The measure would require health insurers, health care subscription plans and health maintenance organizations to provide coverage for the diagnosis and treatment of autism spectrum disorders in children ages 2 to 10. Coverage is currently required for children ages 2 to 6.

Because the bill was amended in a Senate committee, it still must go back to the House for final approval.

School fees: The House approved a compromise on a bill by Del. Kirk Cox, R-Colonial Heights, to limit fees college students are charged to support athletics. Under the agreement, HB 1897 will take effect July 1, 2016. It will not need to be re-enacted by the General Assembly to take effect, an amendment the Senate had sought.

State song: By a 86-11 vote, the House of Delegates joined the Senate in backing measures designating not one, but two official state songs. “Our Great Virginia,” the old “Shenandoah” tune with new lyrics, would be the official traditional state song. “Sweet Virginia Breeze,” penned by Robbin Thompson and Steve Bassett, would be the state’s official popular song.

Gov. Terry McAuliffe has said he intends to sign the legislation.

Drones: The House joined the Senate in passing legislation that would end a two-year moratorium on the use of drones by state agencies.

The bills would require law enforcement and regulatory entities to obtain search warrants before flying drones, except in defined emergency situations or in training exercises related to such situations.

Surveillance: Legislation that would restrict the government’s warrantless storage and use of surveillance technology and information not related to criminal or terrorist activity was also passed by the Virginia General Assembly Thursday.

Sponsored by Sen. Chap Petersen, D-Fairfax, SB 965 was aimed primarily at the use of license plate readers used by government regulatory agencies and law enforcement to gather information.

Like drones legislation, it is one of a number of bills that were submitted in the session to address growing concerns over privacy and government use of advanced technology.

The bill, and its companion legislation, HB 1673, would restrict the retention by law enforcement of information gathered by license plate readers that is unrelated to an ongoing criminal investigation to seven days. It would prohibit dissemination of the information gathered to “outside inquiries” or other internal usages.

Human Trafficking: To counter human trafficking — the second-largest and fastest-growing criminal industry in the world, generating annual revenue of $32 billion — the General Assembly passed several, almost identical measures that would create new felonies for such offenses.

Anyone who attempts to cause a person to engage in prostitution with the intent to receive money in the future would be charged with a Class 5 felony. The charge is increased to a Class 3 felony if the crime involves adults and children, or to a Class 4 felony if it involves a family or household member.

“Virginia is the only state without a statute [for human trafficking], it would join the other 49 states,” said Del. Tim Hugo, R-Fairfax County, sponsor of HB 1188.

Del. Ben Cline’s bill calling for a low-cost college degree has been approved by both chambers and is moving on to the governor’s desk.

The bill, which was amended by the Senate and approved Wednesday, returned to the House of Delegates for a second review Thursday and was approved.

“The goal is still to strive to create a $16,000 college degree,” said Cline, R-Rockbridge County, adding if that goal can’t be reached, the administration will need to explain why.

HB 2320 aims to create a $16,000 bachelor’s degree by working with colleges across the state and pooling resources like online classes.

The degree would be available to every undergraduate in Virginia. Its price tag is inspired by a comparable fee charged by the Western Governors University, a 19-state collaboration that offers degrees in nursing, technology and other high-demand fields.

HB 2320’s hard $16,000 cap gave pause to several lawmakers along the way, and the Senate eventually attached an amendment to soften it.

The bill now states the benchmark is $16,000 or “such cost that is achievable.”

Wood burners fear not the EPA in Virginia

The General Assembly wants to make sure Virginia remains friendly to wood stoves.

After a spirited debate Wednesday, the state Senate approved a House-passed measure that would prohibit the State Air Pollution Control Board from adopting any regulations limiting emissions from home wood heaters. The board also would be prohibited from enforcing any such regulations adopted by the federal government.

Supporters of the bill warned that the EPA would take away wood stoves from thousands of Virginians who can afford no other source of heat.

Sen. Bill Stanley, a Franklin County Republican, said regulations on wood stoves would be “catastrophic.” What’s next in the EPA’s gun sights, he demanded: Fireplaces? Campfires?

The bill was approved 32-7 and now goes to the governor.