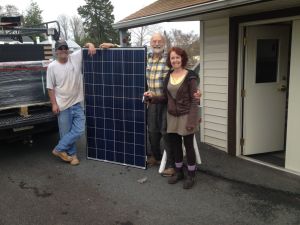 Written and published by VA SUN.

Virginia Organizing has a long history of working with Virginians to make positive changes in the Commonwealth. It has worked on a variety of issues, including building a more sustainable energy system. Importantly, the group doesn’t just talk the talk. It walks the walk. This is why it had a 6.5kW solar system installed on its headquarters last April.

“We have to lead by example,” said Joe Szakos, Virginia Organizing’s Executive Director. “If we believe in renewable energy and want to reduce our carbon footprint, we had better be doing something to reflect that. We’re also pretty good at math.” Szakos says the group expects the system to pay for itself over the next eight or nine years.

Virginia Organizing has been in its current building for the past 17 years. In that time, it has spent a lot of time rehabilitating it, making it more energy efficient. The group received a donated hybrid vehicle, which spurred their thinking about what else they could be doing to alter their energy consumption.

“We’re specialists in community organizing, and we have enough common sense to say we need to connect with the groups that are experts in [specific subject areas],” Szakos said. “So it was terrific to make that connection to VA SUN.”

“In the long run, the challenge is how do we get this to work for low income people? If you aren’t a homeowner, how do you benefit? What is your role in your community?”