Group holds rally in Fredericksburg to show support for Obamacare 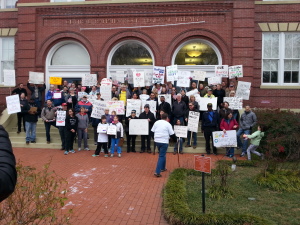 She carried a poster that read: “I’m Here To Fulfill MY Bucket List….Standing UP For HealthCare For My Precious Grandchildren Whose VOICES Are Small But Mine Is Loud and Persistent.”

Haller, 54, who has six grandchildren, wanted to attend last month’s Women’s March on Washington, but her daughter, Holly, was in the hospital at the time.

So mom and daughter took part in the smaller Fredericksburg rally, which the grassroots group Virginia Organizing held to show support for the Affordable Care Act. Republican U.S. senators last month approved a budget blueprint that would allow them to repeal significant parts of the health care law without the threat of a filibuster.

Holly Haller, 24, who recently signed up for an Affordable Care Act plan, did not have insurance when she underwent an appendectomy last year, her mom said. But she said Obamacare has helped defray costs related to major complications from that surgery.

“She definitely needs health care,” said Laurie Haller, who also signed up for Obamacare after her husband lost a federal contractor job in November. “It’s going to be a lengthy, ongoing process.”

Two Fredericksburg police officers escorted her and the other demonstrators, who marched from Riverfront Park on Sophia Street to the nearby Central Rappahannock Regional Library headquarters and back.

As the group walked along Caroline Street, one of the demonstrators repeatedly shouted: “When our health care is under attack, what do we do?”

“Stand up and fight back!” the rest of the protesters responded in unison.

Meanwhile, Laurie Haller said she’s always wanted to attend a protest with her brother, Bill Botts, who is the former executive director of Rappahannock Legal Services in Fredericksburg. She said she was too young to join him in protests during the 1960s and early 70s.

Botts told fellow demonstrators that he has helped more than 1,000 people sign up for Obamacare coverage as a volunteer health care navigator. He called his first year volunteering the “most incredible and inspiring year of my life.”

“People came from all walks of life, united by the common desire to lead healthy lives,” he said in written remarks. He noted that he enrolled supporters of Republican President Donald Trump, who on the campaign trail vowed to replace Obamacare with “something great.”

Haller, who says her family plan costs $108 a month, said she worries about Republican proposals to repeal and replace the law.

Her daughter, a self-employed nanny who is recovering from a severe stomach injury she suffered during an appendectomy, pays $40 a month for her Affordable Care Act plan, Haller said. She is wheelchair-bound, and uses a stomach tube and a peripherally inserted central catheter—or PICC line—to administer antibiotics.

“And we don’t know—five, 10 years down the road even—what she’s going to have to deal with.”