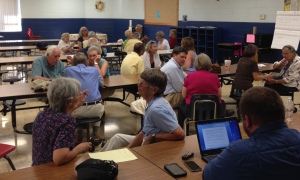 Published by the Bristol Herald Courier

The meeting was held at E.B Stanley Middle School by the Friends of Abingdon, Washington County Independent Neighbors, League of Women Voters and the local chapter of Virginia Organizing. The purpose is to give the community a chance to discuss the potential economic future of the county and develop three to five solid ideas, which will be presented to the Washington County Board of Supervisors.

Around 40 turned out for the first of four meetings, which are the first phase in a process that could lead to positive change, said Brian Johns, with Virginia Organizing.

Johns said that many people in the community have expressed some concern that big decisions are being made and “it feels like the voice of regular folks is not being a part of those discussions.”

The second phase will begin after the meetings; three to five good ideas will then be selected and the strongest will be presented to the board.

To find ways to improve the county, Johns asked those present to consider the community and its current state and look back to when they felt it was at its best.

Many said outdoor recreation, historical elements and arts in Abingdon have always been strengths and may be good focal points for the future.

“We think arts and poetry here is really rich,” said Linda Mashburn, who added that the Barter Theatre is a sort of anchor for the arts, but there’s much more that she wasn’t aware of when she moved to Abingdon decades ago.

Many also said that one of the things hurting the community is the continued effort by the town and the county to bring in more commercial and retail development.

“Tourists don’t need Food City and Walmart. They want to go to places like The Tavern,” said Michael Trepiccione, of Abingdon.

Tourism was also identified as one of the best ways to improve the local economy. Trepiccione said improving the local tourism board could lead to an increase in visitors.

The top ideas agreed on in the first group were tourism, small businesses and using telecommunications to bolster the economy. The meetings will be held Sept. 19 at Damascus Middle School, Sept. 26 at Wallace Middle School and Oct. 3 at Glade Spring Middle School. All meetings are expected to take place from 6-8 p.m.