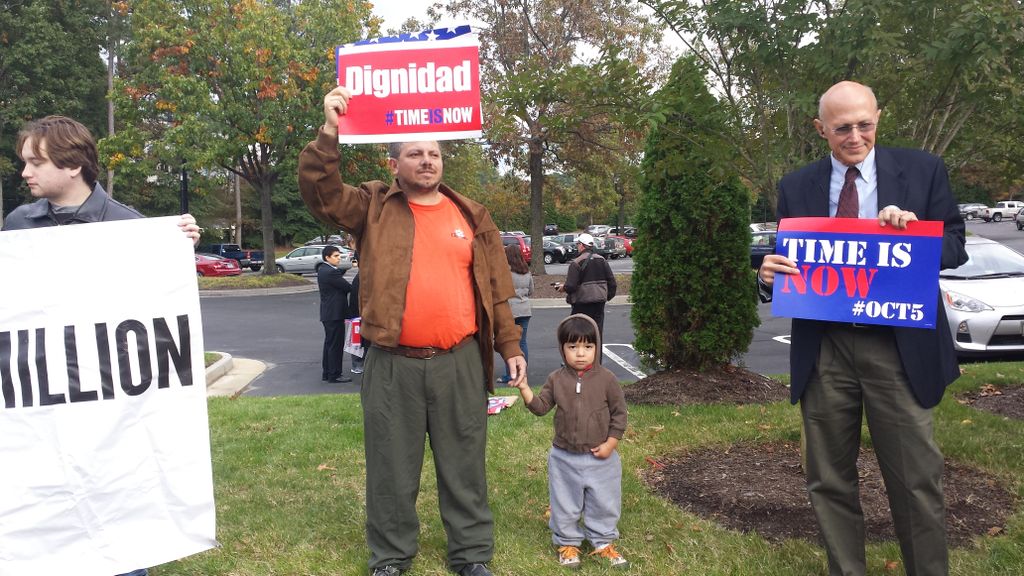 While health care is the topic of conversation in Washington, advocates of immigration reform are pushing House Majority Leader Eric Cantor on the issue at home.

Members of Virginia New Majority organized a rally near Cantor’s Henrico County office on Wednesday and next week plan to present a petition to Cantor urging action.

“Congressman Eric Cantor holds a lot of power as the House Majority leader. He has the influence to help push through a bill that would fix our broken immigration system,” Jon Liss, executive director of Virginia New Majority said in a statement advising the rally.

Another group, Virginia Organizing, recently issued polling and economic analysis in support of its case for immigration reform and today reacted to Speaker of the House John Boehner’s recent indication that the House will take up immigration piece by piece. The Senate this summer passed a comprehensive bill.

But meanwhile, Cantor’s focus has been on the health care law and he’s pushing a measure slated to come to the floor for a vote Friday that would allow insurers to continue offering health insurance plans to people through 2014.

Cantor touted the “Keep Your Health Plan Act” in a news conference this week.

“It simply allows insurers to make good on the President’s promise. It not going to fix the entire problem, and it doesn’t stop ObamaCare from being a train wreck, but it is a good first step,” he said.

“As costs soar and quality of care declines, we are going to continue to fight for our constituents who don’t deserve to have their health care and their paychecks take such an enormous hit that they’re enduring here under ObamaCare.”

Two members of Virginia’s Congressional delegation play important roles on the immigration debate, Rep. Robert W. Goodlatte, R-6th, is chairman of the House Judiciary Committee and as House Majority Leader, Cantor controls what legislation makes it to the House floor.

A Cantor spokeswoman said Thursday that “Congressman Cantor believes that a common sense, step-by-step approach is the best way to deal with immigration reform.”

Cantor, R-7th, has previously stated a desire to focus on the children living here.  “It’s just not fair to me if you’ve got minors that were brought here by parents and they don’t know any other place as home. We ought to be moving on that question and providing them some hope for a path to citizenship to this country,” he has said.