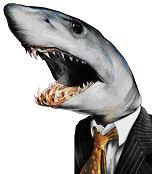 Guess who's having the best week ever at the General Assembly?

The last of several good bills to address the scourge of predatory lending in Virginia just died in committee. Three bills also met their untimely death in a Senate subcommittee on Monday. The Virginia General Assembly is moving on to more important issues like keeping the elderly from voting and have left the predaory lenders to continue their nefarious practices.

Payday loan sharks charge over 300% APR, purposefully locate their shops in low-income minority communities, and perpetuate a viscous cycle of debt for hard-working Virginians. This Monday, State Senator Bill Stanley of Southside cast a "no" vote on three pieces of important legislation that would rein in predatory lenders in our local community.

Tomorrow, Virginia Organizing Danville will be outside of the Advance America calling attention to their bad practices (see below) and asking Senator Stanely to stand up for Southside next time, not the sharks.