by Tamara Dietrich (The Daily Press) 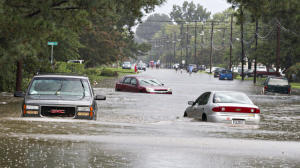 Originally posted in The Daily Press.

Ahead of high-stakes climate change talks in Paris, Secretary of State John Kerry warned Tuesday of increasing and grim national security risks if countries fail to reach a lasting agreement.

Kerry delivered his remarks during a visit to Hampton Roads, where he was briefed on the U.S. Navy’s clean energy initiatives and the region’s response to rising seas and recurrent flooding.

“When we talk about climate change, we’re not just talking about the harm that’s caused to the habitat of butterflies and polar bears, as some people try to (say), as serious as those effects might be,” Kerry said. “We are talking about the impacts on people.”

Kerry announced he’ll be convening a task force of senior government officials to determine how best to integrate climate and security analysis into overall foreign policy planning and priorities.

“If we can better identify red flag areas of risk,” he said, “we can better target our policy assistance in order to enable those nations to become more resilient and secure and less likely to fall into a full-fledged war or humanitarian crisis.

Hampton Roads is considered a global hot spot for sea level rise, with some estimates saying that, if current trends continue, the region could see more than five feet of rise by the end of this century.

It’s also home to numerous military installations, including Naval Station Norfolk, the biggest naval installation in the world. But, as Kerry noted, that facility is also built on land that’s sinking.

ODU is tackling the challenges of climate change in various ways, including its Hampton Roads Sea Level Rise Preparedness and Resilience Intergovernmental Planning Pilot Project. That two-year project is the first of its kind and intended to combine the expertise of federal, state and local agencies with private industries and researchers to develop a planning strategy to adapt to sea level rise.

Experts with the project expect Kerry’s visit can only raise public awareness.

Carol Considine, an associate professor of engineering technology, said it can be a struggle to capture the public’s attention.

“People have a lot of responsibilities, and daily life can be hectic,” Considine said. “And sometimes they get in a box and they’re not looking toward the future. And it’s not their future, but their children’s future. So I think we need to start framing it that way.”

At the 2015 United Nations Climate Change Conference, set to run from Nov. 30 to Dec. 11, getting buy-in from developing countries will offer its own challenge, said Wie Yusuf, a public policy scholar.

“How do the other developed nations really help developing nations make this a priority when they’re already struggling with the basic problems?” Yusuf said.

But addressing the challenges of climate change, said Kerry, is crucial.

“Let me be clear,” Kerry said. “If we don’t act now, it could be the single most profound betrayal by one generation of another, or others, in history. We have to prevent that.

“We have a moral responsibility to protect the future of our nation and our world,” he added. “That is our charge. That is our duty. And for our (global) shipmates, all of us, the generations that follow in their footsteps, we have to get this right.”