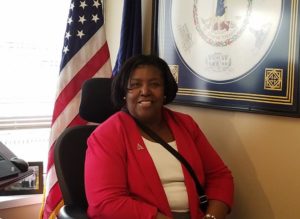 Karen Downing is a native of the Eastern Shore and its public schools. She went to Norfolk State University and then returned home in 1990 and got involved in service to the community.

When Virginia Organizing began to form a new chapter on the Shore in 2016, Karen got involved right away. She was concerned about many challenges that residents of the area face such as poverty, lack of access to health care, and education injustice. She has participated in Medicaid expansion rallies, visits to legislators in district and in Richmond, and she has spoken to the Accomack School Board twice as a leader of her chapter.

“Health care was my first campaign, but now education and the school-to-prison pipeline are very important to me as a native of the Shore,” she said. “This is an economically disadvantaged area, and you can have kids in one classroom, and some of them come from homelessness and some of them come from waterfront property.” The first time Karen spoke to the school board, she discussed the need for better sensitivity and cultural awareness among teachers so that they know how to address the differences among students.

She spoke to the school board again this week about recruiting more teachers of color. “Last year 53 new teachers were hired, but only three of them were people of color,” she said, “and yet 60 percent of the students in the area are children of color.” New strategies are needed, and the board said they would like the chapter’s help in pursuing this goal. Karen’s vision is of a “student-to-teacher pipeline,” which would recruit children in the schools to get education degrees and bring them home to the Eastern Shore to teach in the community.

Karen likes a number of the strategies that set Virginia Organizing apart from other groups. “We choose a specific target and campaign and take decisive action,” she says, describing the Medicaid expansion celebration with Senator Lynwood Lewis as one example of the chapter’s successful relationship building. She also appreciates the importance of canvassing directly affected people, listening to their views, and recruiting them to join the chapter’s campaign. Thank you, Karen Downing, for the work and the vision you bring to the Eastern Shore Chapter!