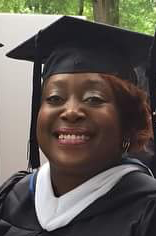 LaKisha (Kisha) Mahone has been a volunteer leader with the Fredericksburg Chapter since February 2015. Kisha and her classmates were doing a research project and chose to study the school-to-prison-pipeline in Spotsylvania County when they came across Virginia Organizing’s work. Kisha became more interested in this topic when it affected two of her children, and this inspired her to stay involved with Virginia Organizing. After she got involved with the Chapter, Kisha said, “I felt like I was at home.”

Most of her work is focused on the pipeline, but she also helps people register to vote and helps restore the rights of returning citizens. This summer, Kisha attended a five-day conference in Albany, New York, to learn about organizing, an experience she called exhausting, but very worthwhile.

Kisha loves the Fredericksburg Chapter and its “environment of excitement.” She loves that the Chapter is able to maintain its volunteer base and that leaders are so involved in their community. Kisha says that the question on everyone’s mind is typically “What’s next?”

To Kisha, empowerment is built into the culture of Virginia Organizing, and she loves the effect she has on her community. “Community members run the organization,” Kisha says. “It is so purposeful and genuine.”

Thank you, Kisha, for all your great organizing!