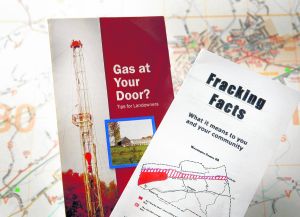 Published by Bristol Herald Courier on May 9, 2014

BRISTOL, Va. — Some landowners whose properties lie in the proposed natural gas drilling overlay zone in Washington County have banded together to voice their concerns over the practice and ask the county to slow down and look at potential effects.

“A lot of people don’t even realize this drilling is going to take place,” said Jimmy Hobbs, who lives in the zone, which is north of Bristol in an area designated for agriculture south of the North Fork of the Holston River, and includes much of Rich Valley Road. “Our concern is not about the money so much; it’s about saving our way of life.”

Hobbs and several others spoke to the Bristol Herald Courier’s editorial board Friday about their concerns. Some are members of the Washington County chapter of Virginia Organizing.

For nearly a year, the Washington County Planning Commission has been reviewing a draft ordinance that would define the area that can be drilled and set forth environmental and land use precautions to protect landowners, the land and citizens.

Currently, drilling isn’t prohibited, but there have been no active wells for decades. In recent months, however, there’s been renewed interest.

Hobbs’ wife, Leigh Hobbs, said she is worried about the potential effects of one mining practice — hydraulic fracturing or fracking — on local waterways.

The process has been controversial for years and several cities recently banned it over concerns that the practice can poison existing waterways and destabilize the earth.

The Environmental Protection Agency is currently seeking public comment on ways to disclose information about chemicals used in the process, which have long been kept out of the private eye.

The commission is expected to vote on the ordinance at its meeting later this month, and then the ordinance will be passed along to the Washington County Board of Supervisors, which has final say over the implementation of county ordinances.

“Our community in the Tyler District, our water is spring or well,” Leigh Hobbs said, adding that if that water is disturbed, there’s not a public water system in place to get water to residents.

The Hobbs said their neighbor has signed a natural gas lease, and they’re worried their land will be force-pooled into a well, which they don’t want.

“It’s disheartening that we have nowhere to turn,” Jimmy Hobbs said. “We’re going to be forced into this.”

Neal Mullins, who lives in Glade Spring but has been outspoken against gas drilling in the past, said he doesn’t understand the need to drill. He said he and others have spoken to county leaders but feel they aren’t being heard.

“If they could drill for gas safely” it would be one thing, Jimmy Hobbs said. “They’re being reckless now. We are going to look back and say, ‘We were stupid to let them destroy all the water.”

Brian Johns, organizing director of the local chapter, said the group’s next steps are to try to get board members to look at current coalbed methane gas wells in Dickenson and Buchanan counties and see what has happened in those communities, as well as organize workshops about leasing land.