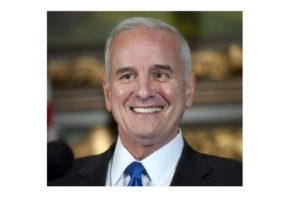 Under Gov. Mark Dayton, Minnesota raised taxes on high-income households – but that state now is growing much faster than the national average. (Gov. Mark Dayton’s office)

RICHMOND, Va. — Many Virginia lawmakers have argued that cutting taxes is the best way to spark economic growth. But in Minnesota, taxes were raised on the wealthy, and their economy is booming.

Several states, including Kansas and Wisconsin, have slashed taxes on higher income households in hopes of sparking growth. But under Gov. Mark Dayton, Minnesota went the opposite direction, and the state’s economy is now growing faster than in those states where tax cuts were deployed.

Minnesota’s unemployment rate is a full point below the national level, and its growth rate is a full percent above average. Clark Biegler, policy analyst with the Minnesota Budget Project, said it was a big tax hike, but it paid for investments in education.

“So it was a two percentage point increase for the 2 percent of Minnesotans with the highest income,” Biegler said. “We’ve been able to fund free all day kindergarten, to improve financial aid for low income students, and we were actually able to institute a two-year tuition freeze.”

During the last General Assembly, Virginia lawmakers agreed to the first statewide funding for a teacher pay increase in years. Opponents argued the state could not afford the additional spending, and said tax cuts would do more to attract businesses and growth.

“Deficits can create opportunities. Minnesota has found that raising revenues – increasing our income tax – has laid a foundation for us to make really important investments in our state,” she said.

By comparison, PolitiFact has reported that Wisconsin is facing a two-year, $2.2 billion budget shortfall. And The Kansas City Star reported that Kansas has an $800 million deficit for fiscal year 2016.