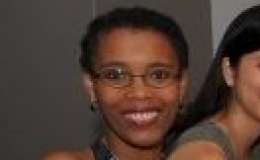 When Linda Powell first got involved with the Virginia Organizing Project she was a little apprehensive but eventually dove right in. Linda is passionate about many issues including public school education, especially for children who have special needs.

Recently, Linda has been involved with the Fredericksburg campaign to hold CSX accountable for the waste being transported through town on train cars. She was also involved with the Fredericksburg tax equity “bake sale for the budget” and even brought her 12-year-old son Samuel along. “I wanted my son to understand that you don’t just complain, you get active. I think it was a great experience for both of us,” said Linda. “The event was about informing people about our primitive tax system and many people had no idea. I had no idea until I got involved myself, so I enjoyed reaching out on this issue.”

In May, Linda attended the VOP Leadership Institute where she met leaders from all over the state. She was excited to meet community members who were directly affected by the issues they were working on. The training helped her to become aware of the issues her neighbors are affected by. She noted that VOP is unique because it is one of few organizations that had such a diverse membership representing different communities and different socio-economic backgrounds.

Having recently moved back the states after living in South Asia, Linda saw the Virginia Organizing Project as a way to connect to individuals in her community who are looking to make change. After living abroad she tends to think more globally than locally. One of the benefits of her involvement with VOP is that she learns about local and state issues such as the restoration of rights for former felons and state tax reform. As an African-American woman, Linda feels passionately about social justice issues and she hopes to eventually see a world that is not divided by race and gender. “We should celebrate diversity and push for deeper acceptance in the community.”