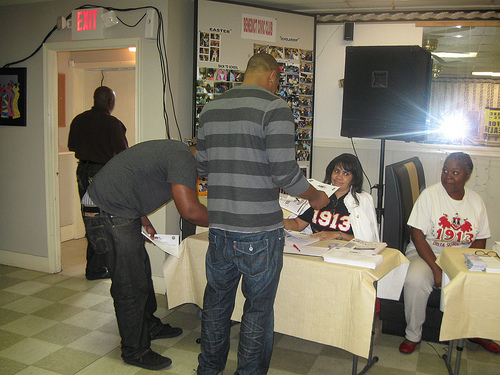 PETERSBURG, VA– As Governor Kaine wraps up his final two months in office, groups are pushing the Governor to sign an executive order effectively restoring the voting rights for the 300,000 disenfranchised former felons in Virginia. On Saturday, December 12, 2009 the Virginia Organizing Project, in partnership with Emmanuel Apostolic Temple in Petersburg held an event in favor of restoration of rights for former felons.

Event organizers asked participants to write and call Governor Kaine, encouraging him to sign an Executive Order to restore voting rights for former felons. Volunteers were also on hand, providing application assistance for those who want to complete the restoration of rights application. “Many former felons do not realize that their rights can be restored. They are either unaware of the process or they don’t know where to start.  Once they find out and apply and have their rights restored, they have a new out -look on life.  They feel that they are now a part of the community,” said Virginia Organizing Project board member Sandra Cook.

Local faith-based and civil rights organizations have rallied around the issue of restoration of rights and are attempting to push as many applications as possible toward the Governor’s office before his term is over.  Governor Kaine has granted rights restoration for over 4,000 felons since he took office.  “People who have committed crimes and shown sincere remorse and paid their society debt should not be held down. It further exacerbates the cycle. My father always gave me this analogy: ‘When you hold someone down, you really can’t get so far ahead yourself. You have to stay back in order to hold them down.’ When you hold people down, society cannot advance ahead,” said Pastor Paul Tolbert of Emmanuel Apostolic Temple

Virginia and Kentucky are the only two states that do not restore rights for former felons upon completion of their sentences. Despite having completed their sentences and being released from probation or parole, thousands of Virginians are denied the right to vote, serve on a jury and pursue employment.

Pam Nicholas was one of dozens of former felons who showed up to the event Saturday. Nicholas was convicted of three misdemeanor shoplifting charges over 20 years ago. The three charges equaled a felony conviction. Nicholas recently applied to have her rights restored and was denied for no reason. “I had wanted to get my rights restored for a while but did not know how to go about doing it. Having my application denied made me frustrated and upset.  I am trying to do something right in your life and trying to keep my head up. I have maintained a job throughout her whole life and have completely changed my life. I made some bad choices over 20 years ago. We all make the wrong choices in our lives. We shouldn’t have to pay for them forever.”

The Saturday event was part of a larger campaign to encourage Governor Kaine to sign an Executive Order. The Virginia Organizing Project has generated thousands of calls to the governor’s office and the White House over the last several weeks to draw attention to the need to automatically restore rights for Virginia’s former felons.