New Report from Alliance for a Just Society 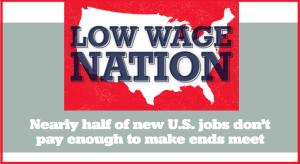 Workers are falling short financially in our nation, and there are few living wage jobs to go around. With most of America’s job growth taking place in low-wage occupations, the reality facing workers is clear: America is becoming a low-wage nation and, without action, the living wage crisis will only continue to worsen.

•Nearly half of new jobs are low-wage jobs: About 48 percent of projected national job openings do not pay $15 or higher. In analyzing individual states, that percentage ranges from 35 percent (Massachusetts) to 61 percent (South Dakota).
•There are not enough living wage jobs to go around: Nationally, there are seven times more job-seekers than there are projected jobs paying $15 or higher, leaving workers seeking better wages with few options.

Read more about low wages in Virginia and the United States from our national partners, Alliance for a Just Society.