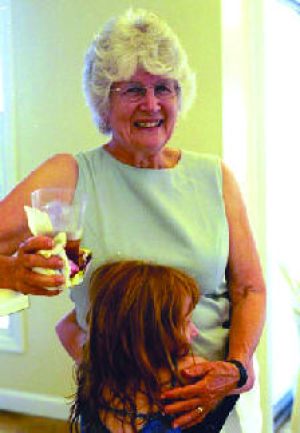 We were deeply saddened to learn that long time Virginia Organizing volunteer in the Charlottesville office, Mary Gaston, passed away. Mary's obituary appeared in the Daily Progress and has been pasted below for your convenience. Virginia Organizing extends our sympathy to her family, friends, and loved ones touched by this loss.

Please click here to be taken to the Daily Progress obituary where you can sign the guestbook.

Mary Wilkinson Gaston Mary Wilkinson Gaston, born in Savannah, Georgia, on March 27, 1929, died on Sunday, November 3, 2013, at her Charlottesville home with her family by her side. Three years previous to this, told she would likely die soon, she had the time and the desire to write her own obituary, stressing what she called the benefits of cancer. Her family includes in this obituary the words she wrote: Foremost among the benefits of cancer were the wonderful visits it effected from special people: her sisters, Gwyneth Francis Wilkinson Love from Wales, and Clare Shoemyen from Alachua, Florida; her nieces, Sibet Grantham and husband, Jim, from Gainesville, Florida, and Imogen Love and Branden Romans from Seattle. She was also able to say "goodbye," which, given her very peripatetic family, was most fortunate.

She no longer had to worry about getting Alzheimer's or whether to have expensive crowns on her teeth. Her husband, Paul, changed from a pretty typical 1950s husband to anticipating her every need and wish. Her friends, organized by Virginia Germino (who else?), brought meals, about 84 of them. Her nephew, John Shermyen, who remembered her saying "Oh now I can eat all the ice cream I want," sent a series of exotic ice creams, all with descriptions like those of fine wine. Her children, Blaise, and wife Cali, Chinta and granddaughter, Eliza, and Gareth, planned and executed wonderful experiences from acupuncture, massages, facials, foot rubs, to trips to West Virginia, and to Wales, to see her younger sister's 16th century stone house in glorious sheep fields and mountains.

She believed Jesus was a very great man and if we really followed his ideas we would be in a better place than we are, but she did not believe he was God or that there is a god who intervenes in our own lives with gifts and punishments. Mary's parents, Edward and Elizabeth Wilkinson, were from London, England, and St. Helena, South Carolina, and Mary was brought up in both England and the United States as well as Nigeria, where her parents were educators and missionaries. She was graduated with honors from Swarthmore College in 1952, where she met her husband of 61 years, Paul Gaston. Subsequently she received a Master of Arts degree in education from Atlanta University. Mary was a civil rights activist, a kindergarten teacher who taught at both Clark and Venable schools, an authority on Jane Austen, a treasured volunteer at Virginia Organizing, a poet, a gardener and, as a Capetown friend has written, "a woman of grace and wisdom".

Mary's last weeks were made easier for her by her son, Gareth and his fiancee, Heather Roberson. They came from New York City to manage her care and the running of the household. Suzanne Pleasants, a longtime friend and family manager, was a constant source of aid to Mary, her husband, and their children. Hospice nurses were especially helpful and have the great thanks of her family. Jorge Hercules saw to the continuing beauty of her garden, giving her great pleasure. Her 15 year-old granddaughter, Eliza, was a constant source of loving care and creative ideas for her grandmother's enjoyment. Mary's ashes will be buried in her garden, where she hopes there will be a pot-luck party this spring, like old times. In lieu of flowers, she would no doubt appreciate contributions to Virginia Organizing.