Medicaid Expansion Would Cover Virginians in Every District 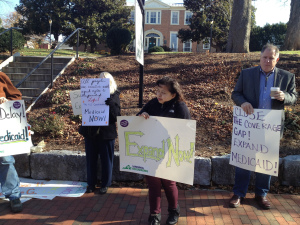 Since the U.S. Supreme Court decided in 2012 to uphold the Affordable Care Act (ACA), but make Medicaid expansion in states optional, the Virginia General Assembly has been stalling and delaying coverage for hundreds of thousands of Virginians. One community hospital has closed as a result of the refusal to expand Medicaid, and Virginia has declined billions of dollars in federal funding to support expansion.

Opponents of Medicaid expansion often stated that they did not think the ACA would last and had hopes that the law would be repealed with a new Congress and new President. After years of failed attempts to repeal the ACA, Congressional leadership introduced a replacement plan known as the American Health Care Act. This flawed bill also failed to garner the support of the majority. Most recently, there have been signals from Washington, D.C. that this dangerous bill could be reintroduced with even more harmful provisions.

While future attacks on the ACA cannot be predicted in this political climate, what we know now is that Congress is divided on this issue, including within the parties. But we still have an opportunity to make health care more accessible for hundreds of thousands of Virginians.

Yet Virginia state lawmakers remain opposed to Medicaid expansion to ensure those that need care can receive it.

In places like Virginia Senator Charles Carrico’s district, which includes Lee County where a hospital closed partly due to Virginia’s failure to expand Medicaid, 11,000 people would be eligible for expansion according to a report by The Commonwealth Institute available at http://bit.ly/TCIMedicaid.

“I don’t understand why these politicians are putting the lives of constituents at risk,” said Virginia Organizing Chairperson Ladelle McWhorter. “The federal government needs to focus on issues that are actually problems instead of trying to dismantle protections for Americans. Virginia General Assembly leadership is out of excuses and they need to act.”

Virginia Governor Terry McAuliffe proposed expanding Medicaid again after Congress failed to act on health care, but legislators rejected the proposal. It is unclear what plans the General Assembly has to insure those who currently fall in the Medicaid coverage gap — these individuals do not qualify for current Medicaid based on income, family size, and disability status, but do not earn enough to qualify for health care subsidies on the ACA insurance plans.

Virginia Organizing will continue to organize in support of Medicaid expansion and health care for all people. Be sure to check out our Act Now! page at www.virginia-organizing.org/act-now to get timely action steps each week on various issues.