Home » The Issues » Health Care » No premiums for politics…Why we were kicked out of Coventry.

No premiums for politics…Why we were kicked out of Coventry. 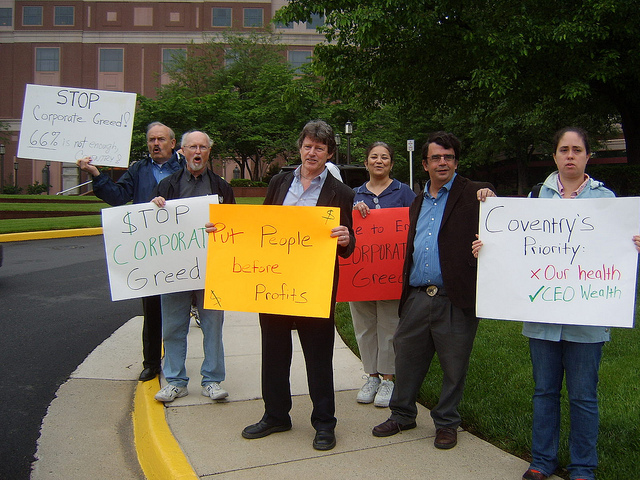 Yesterday morning a dozen Virginia community activists rolled out of bed very early to drop by the Ritz Carlton on their way to work. All before 9:00 am, this group was thrown out of the Ritz Carlton and succeeded in disrupting the shareholders meeting of the 6th largest health insurance company in the United States.

Not too shabby for not having any coffee yet! The Tysons Corner Ritz Carlton hosted the annual shareholders meeting for Coventry health insurance. These meetings are usually the epitome of boring. They follow a script and limit questions as much as possible. In fact, these meetings are so well-rehearsed that it has become standard practice for most companies to have their staff ask scripted soft ball questions to lend the appearance that real shareholder voices are being heard. Perhaps MBA programs should start requiring acting classes.

But the mood of this shareholder meeting was different. After the massive demonstration in Ohio at the JP Morgan Chase shareholders meeting, the insurance execs were on high alert. To add fuel to the fire, many shareholders are unhappy with what the big insurance companies are up to right now. There are major pension funds and consumer shareholders who are pretty fed up with companies like Coventry using premiums dollars towards politics. Coventry is a member of a trade group that in 2009 secretly contributed at least $86 million for ads run by third parties to oppose health care reform. The money was funneled through the U.S. Chamber of Commerce, which ran the attack ads while the insurers were claiming to support health reform.

Several consumer shareholders, including Paula Neustatter and Joe Katz of Fredericksburg, held proxies to go inside the shareholder meeting and speak in support of a shareholder proposal to disclose future monetary and non-monetary political contributions used to influence elections. “We have to tell Coventry and other big insurance companies to stop trying to purchase our democracy as they did in the last election cycle. When corporations spend hundreds of millions of dollars trying to influence the election we not only lose our voices but our chance at affordable health care as well,” said Paula Neustatter, health care provider and Virginia Organizing member.

Despite having the proper credentials, Paula Neustatter and Joe Katz were blocked by Coventry staff from speaking during the comment period. When Neustatter attempted to speak on the resolution calling for greater transparency in the company’s political donations, the microphone was promptly whisked away by a Coventry employee determined to not allow her to speak.

As the consumer shareholders were being blocked from commenting inside the room, activists were chanting outside the meeting in order to draw attention to Coventry’s abusive practices.  Eventually Coventry’s CEO paused and motioned to one of his staff to deal with the disturbance outside. Several minutes later Ritz Carlton security politely escorted the protesters out of the building with one of the protesters joking, “This is the nicest place I have ever been kicked out of!” While the disturbance continued outside the meeting room, Joe Katz sat inside the shareholder meeting and watched Coventry’s reaction, “From inside the meeting room I could see the look of fear in the eyes of Coventry’s CEO when he heard citizens just outside the room chanting about the need for transparency and accountability,” said Katz. “What happened in that shareholder meeting is that the executives realized that we have their number and plan on holding them accountable. The American people are not going to take this anymore. These big insurance CEOs cannot hide in corporate boardrooms anymore. We have a right to know how our health care system operates and where our health insurance premiums go.”

Although Katz was dismayed to watch the scripted dishonesty of the shareholder meeting process up close, he was encouraged that a handful of people making a little noise could disrupt a major insurance company so effectively. “The execs in the meeting looked genuinely scared. Pretty soon health care is going to be a right and not a privilege and that is the idea that frightens these CEOs the most.”