Home » Chapters » Norfolk » Norfolk family says when it rains, it floods to the point they can’t leave the house

Norfolk family says when it rains, it floods to the point they can’t leave the house 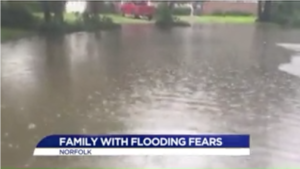 NORFOLK, Va. – The Treadways are treading through water almost every time it rains, just to get in and out of their home. Even if it’s just a regular rain and not a storm.

“I freak out every time. If I hear thunder, I wake up to run outside and move my vehicle just so I can be prepared for the next day,” said Shadoe Treadway.

Shadoe, his wife Jessica and their two little kids live in the Azalea Gardens neighborhood of Norfolk at the end of a cul-de-sac.

“It sucks honestly. Not only do we get debris that floats up from the trees, but all the water sets right there at the drain and on average, 18 inches,” said Shadoe.

Jessica said she tries to leave the when it floods, but the water is just too high, even if she’s in her husband’s truck. The Treadways said they reached out to the City of Norfolk for a fix, but things haven’t gotten better.

The city told News 3 a storm water inspector spoke with the Treadways May 30 and said:

The drain inlet and pipe are very close in elevation to Lake Whitehurst and therefore when it rains a significant amount, water may end up flooding the end of the cul-de-sac.

The city of Norfolk said every time the Treadways called, they’ve always sent someone out to investigate the problem.

In the meantime, Shadoe said he has to prepare for rain.

“Usually, I wake up in the middle of the night if I hear rain and move my vehicles because if not, I won’t be able to leave my house,” said Shadoe.

So if it’s raining, there will be cars in the middle of the street, at least until the problem is resolved.