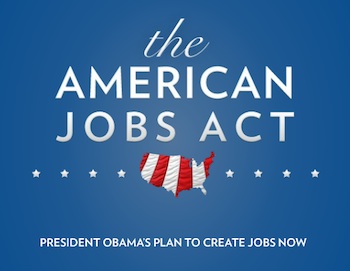 President Obama proposed a fair funding plan that would close corporate loopholes and make the wealthiest Americans pay their fair share, all part of a sound approach for funding the American Jobs Act.

For years, the wealthiest Americans and biggest corporations have been underfunding our government by paying much less than their fair share in taxes. Closing a myriad of corporate tax loopholes and making sure millionaires pay the same percentage of taxes as hard-working Americans will go a long way to restoring some equity in our tax system.

* cutting payroll tax in half for businesses with payrolls less than $5 million/year,

* having a payroll tax holiday for those who add workers or increase wages for workers,

* extending the incentive for new investments (100% expensing) into 2012, and

2.     Put Americans back to work rebuilding and modernizing America by …

* offering a tax credit for hiring veterans, especially for our “Returning Heroes,”

* keeping cops and fireﬁghters on the job,

* making immediate investments in rebuilding our infrastructure putting 1000s to work, and

3.     Pathways back to work for Americans looking for jobs through …

* reform to the unemployment insurance program, including work-sharing and a new “Bridge to Work” program,

* a $4,000 tax credit to employers for hiring long-term unemployed persons,

* prohibiting discrimination against the unemployed when hiring, and

* allowing more Americans to reﬁnance their mortgages at 4% interest.

5.      Fully paid for as part of the President’s long-term deficit reduction plan.

* To ensure that the American Jobs Act is fully paid for, the President is asking the Joint Committee to come up with sufficient deficit reduction to pay for this bill.

This factsheet was produced by Ginney Downie of Fredericksburg for her website: Justthoughtyoushouldknow.org