On expanding Medicaid: “Virginia’s money needs to stay in Virginia”

Published on The View From Peak’s Knob.

One of my hardworking colleagues just found out that her family’s health insurance premiums are about to go from about $250 to $1200 a month. Upon hearing that, I was tempted to sarcastically exclaim, “Thanks Obama” and rethink my limited support for the Affordable Care Act. But then I looked into the reason her premiums were increasing so sharply and learned that it wasn’t Obamacare’s fault so much as the fault of our legislators here in Virginia who have refused to expand Medicaid, leaving thousands of our neighbors uninsured and billions of dollars in federal taxes paid by Virginians funding health insurance for residents of other states.

The healthcare plans available through the marketplace assume that states are expanding Medicaid. In those states, most families earning less than some percentage of the poverty rate are eligible for Medicaid and those earning from 100-400% of the poverty rate are eligible for subsidized plans through a tax credit. In Virginia, however, we have a gap in the coverage because we have not expanded Medicaid. For people earning more than the threshold for Medicaid (which, for working parents in Virginia is 30% of the federal poverty level, or $6.126 for a family of three), but less than 100% of the poverty rate (which for a family of 3 is $20,420), there is no assistance in Virginia. My colleague’s health insurance premiums more than quadrupled because her husband lost his job and their expected income went down, through no fault of their own.

Let me restate that. In Virginia, if you have a family of three and make between $6,126 and $20,420 annually, you are neither eligible for Medicaid nor for the subsidized health care plans that are available to much wealthier families. And if you are a “childless adult”, you are ineligible for Medicaid period.

My colleague is by no means alone in our Commonwealth’s health coverage gap. Many of my students at NRCC are right there with her, earning too much to qualify for Medicaid, but too little for the subsidized plans. One of them is David Yarzebinski who has suffered from Type 1 Diabetes since he was ten years old. He spoke at a recent Virginia Organizing media event calling on our state delegate Nick Rush to support expanded Medicaid: 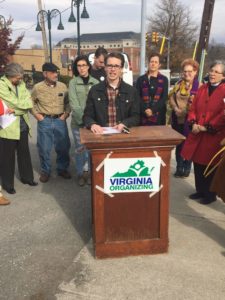 “I have applied for Medicaid on four separate occasions and have been denied on four separate occasions. The reasons for being denied are as such: I am under the age of 65, I am above the age of 19, I am not blind, and I do not have dependents. However, I do not make enough from my job while attending college to afford the cost of [unsubsidized] health care from the open market, while paying the rest of my bills. There are over 240,000 people just like me in the state of VA, 3,800 in Montgomery County alone. These are not valid reasons that I have to struggle to receive the medical help that someone like myself, or anyone for that matter, to be denied medical assistance.”

David is doing everything any of us could ask of him. He’s working nearly full time while he is in college and he’s a great student. As a community, we should want David to have access to affordable health care because he is going to contribute to the New River Valley in amazing ways as he gets older. If he can get the healthcare he needs to get older. He closed his comments last week by saying:

“[This country was] built on the promise of the right to life, liberty, and the pursuit of happiness. My right to life is compromised and I need assistance, I am not afraid to ask for it. I have many times before and I will continue to do so in the future, but it’s heartbreaking when I am denied that simple right, over and over again.”

These stories and those of thousands of our neighbors keep me awake at night, but I assume that’s the not the case for everyone. As one of my research-oriented friends likes to remind me, “data is not the plural of anecdotes.” For those who are relatively unmoved to expand Medicaid based on these individual stories, perhaps looking at the way expanded Medicaid can support the local economy will be more compelling. Beth O’Connor, executive director of the Virginia Rural Health Association explains:

“Unlike a business, a hospital has to accept anyone who walks into the emergency department, whether or not they are able to pay. If you are hungry and go to a grocery, but are unable to pay – you will not get food. But if you show up at a hospital, that facility is required by federal law to serve you anyway. If too many people are unable to pay, the hospital will close. On October 1st, 2014 Lee Regional Medical Center closed. It is dead. The jobs from that facility are dead; the money it pumped into the local economy is dead. Cause of death? The lack of Medicaid expansion.”

HCA Virginia Health System (owner of Lewis Gale Hospital Pulaski) is the ninth largest employer in the New River Valley; Carilion New River Valley Medical Center is the seventh. As O’Connor pointed out in her remarks, “Loss of a hospital means the loss of jobs…These are not low-paying, entry-level jobs. These are doctors, nurses, anesthesiologists, therapists. Loss of a hospital means losing a pillar of the local economy.”

For those out there who are unmoved by either individual stories or by appeals to shoring up the local economy, O’Connor closed her remarks with a reminder that the dollars our legislators are refusing are our dollars, currently going to expand Medicaid for individuals in other states:

“Remember that the Affordable Care Act is a federal program. Therefore, the people of Virginia are already paying for Medicaid expansion. My taxes, your taxes, are being collected to support Medicaid expansion, but those dollars are going to Washington, DC, and not coming back to Virginia. In September of 2010, Virginia had 24 small, rural hospitals. Now there are 22. How many more will close before we determine that Virginia’s money needs to stay in Virginia?”

Here in Pulaski County, some of us are concerned about the plight of individuals – ourselves and our neighbors – trying to access health care. Some of us are moved by concerns about a potentially fragile local economy. And some of us want to stop sending money to Washington, DC, never to be seen again. While our motivations may differ, supporting expanded Medicaid should be a no-brainer for all of us.