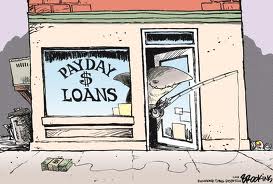 I’ve spent some time trying to verify the assertions in A. Barton Hinkle’s Nov. 4 column, in which he pondered whether payday lending is a “convenient courtesy” or “evil incarnate.”

Each of his positive arguments can be refuted individually, but they are undone collectively by a single fact: “The profitability of payday lenders depends on repeat borrowers” (Federal Reserve Bank of Kansas City). According to the Pew Center, “the average borrower uses eight loans lasting 18 days each and thus has a payday loan out for five months of the year.” The same flat fee is assessed at each renewal, resulting, in Virginia, an average annual percentage rate of 290 percent.

“Borrowers who receive five or more loans a year account for 90 percent of the lender’s business” (Center for Responsible Lending). And for 70 percent of users, they are not for one-time purchases but for recurring expenses such as rent, food and utilities (Pew).

Make no mistake: payday lending is profitable. Advance America’s 2011 annual report shows 11 percent profit. Site gross profit was up 22.5 percent over the previous year, and net income by 89.1 percent. No wonder the company has just been bought by a Mexican billionaire.