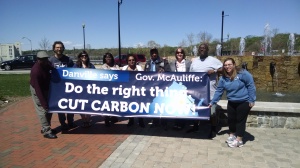 Published by the Danville Register & Bee.

A Clean Power Plan rally was held in Danville on Saturday afternoon to raise awareness of efforts being made to reduce carbon pollution.

Around 20 people showed up to the fountain on Main Street at the Martin Luther King Jr. Bridge for the cause. The Dan River Basin Association hosted the rally in partnership with Virginia Organizing, a non-partisan grassroots organization dedicated to empowering people in local communities, according to the group’s website.

The purpose of the rally was to petition Gov. Terry McAuliffe to pass the Clean Power Plan. The Clean Power Plan is a “federally implemented plan to move toward cleaner energy and away from fossil fuels and the damage they can have on the environment,” said Amy Farinelli, program coordinator of the Dan River Basin Association.

A news release from Virginia Organizing states that the plan “calls upon the state government to uphold standards set for Virginia by the Environmental Protection Agency’s Clean Power Plan.”

Danville was one of 12 cities in Virginia to participate in the planned rallies Saturday afternoon. Local organizers called for carbon reduction from power plants and an increase in energy efficiency and renewable energy like wind turbines and solar panels.

“By doing that, they’re ensuring that our environment and natural resources are protected for generations to come,” Farinelli said.

“It was really important for us to have [a rally] in Danville because of issues we’ve faced related to nonrenewable energy sources” like the coal ash spill in Pittsylvania County in February 2014, she said.

After the speeches, the organizers and attendees walked around the city passing out flyers and engaging in conversation with residents.

“We are very proud to support the efforts of Danville-area individuals and organizations as they rally for a commitment from Gov. McAuliffe,” Ladelle McWhorter, chairperson of Virginia Organizing said in a news release. “We expect this strong display of dedication from local Virginians will spark a more proactive approach to clean power from our elected officials in Richmond.”