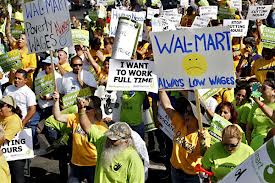 Published December 2, 2012 by the Roanoke Times at http://www.roanoke.com/editorials/letters/wb/318495

For two quarters, they'd get a raise

On “Black Friday” some Walmart employees around the nation, for the first time, held a strike. Walmart workers earn so little that many must resort to public assistance such as food stamps or, if ill, Medicaid. So, you as a shopper may “save” when you shop at Walmart, but you, as a member of the public pay to help many Walmart employees.

Yet Walmart Corporation scorns efforts to increase employee wages and is ferociously anti-union. Its attitude is that workers should be grateful to have a job.

A University of California study calculated that if each person paid an average of 46 cents more each trip to Walmart, this would provide enough to pay the average employee $12 an hour (instead of the current $8.81). If Walmart itself paid half of that 46 cents from its own great profits, it would cost shoppers only 23 cents extra per visit.

If boosting Walmart employees into a livable wage range would require so little, why isn’t it happening? Almost every American can understand what fairness means. Why can’t Walmart?