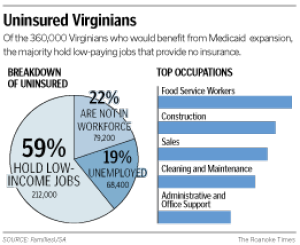 Supporters of Medicaid expansion in Virginia sought to turn a political issue personal Thursday with a report that details the daily livelihoods of those who would benefit.

Nearly 60 percent — roughly 212,000 low-income and uninsured Virginians — perform services that most people rely on daily, according to the report.

“Expanding Medicaid will help Virginians who are in jobs that are the backbone of the economy, and that all of us encounter every day,” said Dee Mahan, Medicaid program director for Families USA, a group that has advocated for the Affordable Care Act.

The report was commissioned along with Virginia Organizing, a citizens advocacy group that has been pushing for an expansion of Medicaid, the government health insurance program for the poor and disabled.

With the General Assembly at an impasse on whether to accept federal funds for an expansion, mostly along partisan lines, the two groups are hoping the report will shine a more personal light on the debate.

Part of the Affordable Care Act includes an expansion of Medicaid to include people with incomes of up to 138 percent of the federal poverty guideline, or about $16,000 for an individual and $27,000 for a family of three.

Participation is up to individual states, and Virginia is one of 24 that have so far not expanded their programs.

The state’s current Medicaid program only covers parents with extremely low incomes — about $10,000 a year for a family of three, according to the report. Adults with no dependent children are not eligible at all, regardless of how poor they might be.

People with low to moderate incomes are eligible for subsidized insurance sold through a government-run website — creating a coverage gap for the poorest of the poor.

Ray Scher, a member of Virginia Organizing’s board, recently worked as a volunteer to help people obtain subsidized coverage through Healthcare.gov.

About one of every four people seeking help would have qualified for Medicaid had the eligibility guidelines been expanded as called for by the federal health care law, but did not meet the threshold for the next level of coverage.

“It was a crying shame,” Scher said. “We had to tell working Virginians they did not make enough money to get help getting affordable health care.”

Based on census data, the report released Thursday found that 59 percent of the approximately 360,000 people who would benefit from enhanced access to Medicaid work in low-paying jobs that don’t provide health insurance.

Another 22 percent are students, non-working spouses, disabled or people who have decided to leave the workforce. The remaining 19 percent are unemployed but looking for work.

Among the working poor, 16 percent are fast-food workers, cooks or waitresses; 14 percent hold construction jobs such as carpenters and painters; and 13 percent are cashiers and retail salespeople.

Although many of the working poor hold more than one part-time job, the report counted only the positions considered to be someone’s primary occupation.

Joining Mahan and Scher in a teleconference Thursday was Yolander Davis of Virginia Beach, who provides adult home care for the intellectually disabled but cannot afford health insurance.

“I work every day,” Davis said. “And to be told I don’t qualify for something as simple as health care is unfair.”

Expanding Medicaid in Virginia would not just help those in need, advocates say, but it would also boost the state’s economy and create new jobs.

“Perhaps no action represents a smarter long-term investment in Virginia’s economy than ensuring that its workers are prospering and healthy,” the report stated.