Home » The Issues » Anti Discrimination » REPORT: “How can we be equal when there is an economic divide between races?”

REPORT: “How can we be equal when there is an economic divide between races?” 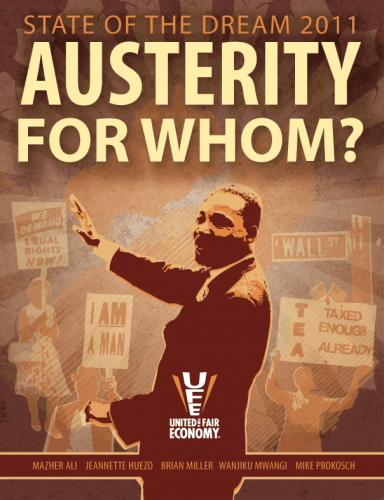 In honor of Martin Luther King, Jr. Day, United for a Fair Economy released a new report today showing that conservative attacks on government, public sector workers, social safety nets and the progressive tax system widen the racial economic divide because they disproportionately harm Blacks and Latinos. These findings were released today by United for a Fair Economy with support from Virginia Organizing (formerly Virginia Organizing Project) in State of the Dream 2011: Austerity for Whom?

“In Virginia, we are only beginning to see the impact of the last four years of severe budget cuts supported by both Republicans and Democrats. It comes as no surprise that austerity measures affect Blacks and Latinos more than other Virginians. On Dr. Martin Luther King, Jr. Day, we can take pride in celebrating the great strides we have made in race relations in this country. However, nothing threatens true racial equality more than economic inequality,” said Sandra Cook, Chairperson of Virginia Organizing. “How can we be equal when there is an economic divide between races?”

“Unfortunately, the report, State of the Dream, shows we still have a long way to go when it comes to economic equality. Virginia's budget cuts to Medicaid benefits, education and school breakfast programs have only taken us backwards by weakening the social safety net,” added Cook. “Dr. Martin Luther King, Jr. wanted everyone on the same playing field and it seems like we are moving further from, not closer to, his dream.”

“Through their policy proposals, conservative leaders – at all levels of government – are suggesting that we postpone not only the recovery, but also the prospect of a better future,” said Brian Miller, Executive Director of United for a Fair Economy and co-author of the report. “Conservative austerity measures will ratchet down the standard of living for all Americans, while simultaneously widening our nation’s racial and economic divide.”

State of the Dream 2011documents how the conservative agenda increases economic inequality and deepens the racial divide. Forty-two years after Dr. Martin Luther King Jr.’s death, Blacks earn only 57 cents, and Latinos 59 cents, to each dollar Whites earn. The tax cuts advocated by conservatives will worsen this divide by flowing disproportionately to wealthy White households, while the proposed cuts to social safety nets and the public sector work force will disproportionately harm Blacks and Latinos. Notable findings from the report include:

·       Job Creation: With an official unemployment rate of 15.8% for Blacks, 13% for Latinos, and 8.5% for Whites, conservative opposition to public investments and direct job creation programs disproportionately hurts Blacks and Latinos, while hindering the recovery from the Great Recession for the entire economy.

·       Social Safety Net:Financial cushions allow families to survive un- and under- employment; Blacks hold only 10 cents of net wealth, and Latinos hold 12 cents of net wealth, for every dollar that Whites hold, making unemployment insurance, Social Security and public assistance vital to the economic well being of these groups. Among retirement age adults, for example, 60% of Blacks and 65% of Latinos depend on Social Security for over 80% percent of their income, compared to only 46% of Whites.

The report calls for more protection of government employees, who perform valuable functions for society, and additional federal aid to the states. Virginia received $2.5 billion in stimulus funds through the American Recovery and Reinvestment Act in 2009, which saved or created 23,003 jobs. Similar job-saving stimulus from the federal government, combined with state-level progressive tax reform, will help Virginia address its racial wealth disparities.

Virginia Organizingis a statewide grassroots organization that brings people together to create a more just Virginia. Virginia Organizing is a partner of United for a Fair Economy through its program, the Tax Fairness Organizing Collaborative, a network of 28 state groups working to address economic inequality through progressive tax reform. More at www.virginia-organizing.org.

United for a Fair Economyis a national, independent, nonpartisan, 501(c)(3) non-profit organization located in Boston, MA, which works to rein in extreme inequalities and promote a more broadly shared prosperity. More at http://www.faireconomy.org.