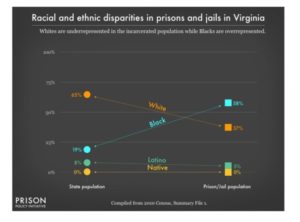 RICHMOND, Va. — Widespread incarceration of African Americans during the drug war feeds the achievement gap in U.S. schools, according to a new report.

The study from the Economic Policy Institute found 1-in-4 African American students has a parent who is or has been incarcerated – and an African American child is six times more likely than a white child to have a parent who has been in prison. According to Leila Morsy, senior lecturer at the University of New South Wales and co-author of the report, when parents are sent to prison, their children become more susceptible to depression, behavioral problems and ADHD.

“Having spent time in prison is significantly worse for someone’s prospects going forward, for the prospects of somebody’s family going forward, than just having been through, say, probation,” Grawert said.

Morsy stressed that sentencing reform and increased educational and employment opportunities for released offenders also would benefit those left behind when a parent goes to jail.

“Improvements in our criminal justice policies will lead to improved outcomes for children,” she said. “It will make teachers’ jobs easier and are very likely to contribute to narrowing the achievement gap.”

In 2014, more than 600,000 inmates nationally were serving sentences of a year or more in state prisons for nonviolent crimes.