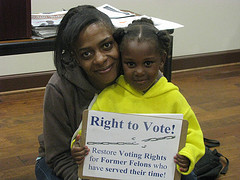 In the United States, only Virginia and Kentucky permanently disenfranchise all felons upon conviction, requiring an act of the Governor to restore voting rights. Virginia’s disenfranchisement policy is a vestige from the Jim Crow era and was a product of the 1901 Constitutional Convention, deliberately designed to marginalize people of color.

We believe that community, economic, social and environmental policies should be developed with the greatest input from the people it is meant to serve, and that the policies should promote, celebrate and sustain the human and natural resources of Virginia. By silencing such a large number of voices through voting restrictions, Virginia is limiting the ability of those who have completed sentences for felonies to fully reintegrate into society by limiting their voices.

The Governor has the authority to restore voting rights via an Executive Order to all of Virginia’s former felons. There are more than 365,000 Virginia citizens who are unfairly denied the right to vote. We support changing the current disenfranchisement policy for good by automatically restoring the voting rights of former felons when they complete their sentences.