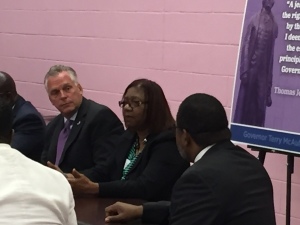 Governor McAuliffe listens as Shelia Carter shares her story at a Restoration of Rights roundtable in Norfolk. VIRGINIA ORGANIZING

Published by the Virginian-Pilot.

I hesitated to call Patricia Skinner on Monday. I didn’t want to further muddle a confusing situation.

Skinner, a former felon-turned-health care worker, served 2½ years behind bars for drug trafficking more than a decade ago. But the Norfolk woman got back her right to vote after Gov. Terry McAuliffe’s sweeping executive order restored the privilege to 206,000 people in April.

Then Friday, the Virginia Supreme Court narrowly rejected the governor’s move, saying it violated the state constitution. Republican leaders had challenged the order.

Yet Skinner, who’s been working for 13 years in a nursing home, should be able to vote legally come November. The guv pledged, in the wake of the justices’ 4-3 decision, to “expeditiously sign nearly 13,000 individual orders to restore the fundamental rights of the citizens who have had their rights restored and registered to vote. And I will continue to sign orders until I have completed restoration for all 200,000 Virginians.”

Skinner said she’s one of those newly registered voters. She deserves the chance to cast a ballot, as do others who have served their time and want to be full citizens.

First things first: The justices indeed rebuffed McAuliffe. The state constitution allows the governor to restore rights to felons including voting and sitting on a jury, but no other governor had deemed it legal to do so en masse.

Several constitutional scholars, though, had supported the move by McAuliffe, a Democrat. They included A.E. “Dick” Howard, who drafted the current update to the constitution. You can read the court’s ruling here.

“The Supreme Court of Virginia delivered a major victory for the Constitution, the rule of law and the Commonwealth of Virginia,” they said in a joint statement.

Two out of three ain’t bad.

The ruling may support the constitution and the law, but it’s far from a victory for Virginians. The text dealing with restoration of felons’ rights is among the final vestiges of the Jim Crow era. It targeted blacks and was a method to keep them from the polls. Shame on the party for continuing to defend it.

GOP legislators, especially in the House, have been the main impediment to making the process simpler. As the justices conceded: “At least 69 resolutions and bills addressing categorical exclusions to the voter-disqualification provision in Article II, Section 1, were offered during each of the legislative sessions from 2004 through 2016, including one continued to the 2017 legislative session – and all have failed to pass the General Assembly.”

I can only imagine why.

The Assembly continues this intransigence despite the fact that Virginia is among just four states with the most restrictive restoration process in America.

Nor will this stop McAuliffe’s plan to reinstate voting rights to those harmed by Friday’s ruling. “[T]the majority acknowledges that the Governor could use many individual orders to achieve the mass restoration of rights he sought to accomplish under the Executive Order,” the dissenting justices noted. “Thus, the majority, in essence, takes the position that the Suspension Clause requires the Governor to exercise his executive powers in a different, less efficient manner.”

Observers will note McAuliffe’s move is partisan – and they’re right. He supports close friend Hillary Clinton for the presidency.

The Republican opposition is equally as partisan, though indefensible.

Is the long-standing policy just? The unequivocal answer is no.

Confusing or not, McAuliffe plans to sign restoration orders till he drops.

Good for him – and the Virginians he helps.