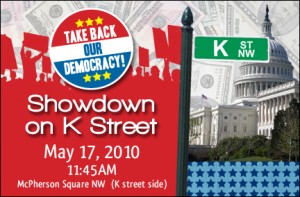 On May 17, everyday people from across the country descended on K Street in Washington, D.C. K Street is ground-zero for the corporate lobbyists that are driving gridlock in Washington. The plan was to draw a direct line between Wall Street CEOs, their hired guns on K Street, and the elected officials who have become addicted to Big Bank campaign contributions. The Virginia Organizing Project, RePHRAME, Virginia Partnership for Responsible Lending, and other concerned Virginians joined thousands at the rally and then visited the offices of Senator Mark Warner and Senator Jim Webb. The Virginia delegation asked their Senators to cast a vote for Main Street over Wall Street and support a strong financial reform bill.