Stand Against the Atlantic Coast Pipeline 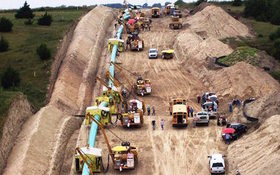 Usually, people will not get too involved with matters that do not directly impact their lives. An example I have seen recently is the Atlantic Coast Pipeline. This pipeline will run 550 miles from the shale fields of West Virginia to Virginia’s coast around South Hampton Roads, and I believe it deserves our attention and opposition.

The current plans for its path will impact nearby communities, beautiful forests, and popular trails. This high pressure pipeline could be the first to be built across steep forested terrain as found in the Alleghenies and the Blue Ridge Mountains. Pipe leakage and the rupture of these pipelines due to unstable soil structure would contaminate the ground water in surrounding areas.

The risks of ruptures and explosions is a real and credible threat. Since 2010, there have been 328 significant pipeline incidents in the United States. “Significant incidents” mean significant property damage, inpatient hospitalization, and even fatalities. Landowners and businesses along the route will see a decrease in property values because of the visual effects of a 75- to 125-foot wide clear cut and the threat of explosion.

We should also ask ourselves how many other pipelines will branch off this one. Pipelines increase our dependence on the damaging practice of fracking that triples carbon emissions and contributes to sea level rise. We Dominion customers will be stuck with the bill when these gas infrastructure projects get shut down early to address climate change. Importantly, the funds spent on pipelines is money not available for investment in renewable energy.

Now it’s up to you to decide if the Atlantic Coast Pipeline calls for our involvement and needs to be a concern of ours.