State of the States Report 2015

Poverty and Opportunity in the States: The Good, The Bad, and The Ugly 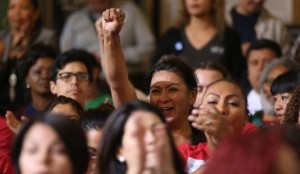 SOURCE: AP/Damian Dovarganes
Workers react as the Los Angeles City Council votes to raise the city’s minimum wage to $15 per hour by 2020 on May 19, 2015.

Published by the Center for American Progress.

In 2014, more than one in seven Americans—46.7 million people—lived below the official federal poverty level of less than $24,000 per year for a family of four. While the U.S. economy has gradually improved in the aftermath of the recession, far too many families continue to struggle to make ends meet, much less get ahead.

Each year, the Center for American Progress releases its “State of the States” report, which evaluates progress toward cutting poverty and increasing opportunity by tracking 15 key indicators in each state. These indicators can help state policymakers better understand the areas in which states are improving the situation of struggling families, as well as the areas in which they must do more to promote families’ well-being. The report ranks states according to how successfully they are reducing poverty and inequality, improving the quality of jobs and education, promoting family stability and strength, and ensuring family economic security.

As this report underscores, policy matters when it comes to addressing poverty and improving economic opportunity. State policymakers have a host of tools at their disposal to bring about change that makes a meaningful difference in the lives of American families.

This year’s report highlights examples of commendable and innovative steps that states have recently taken to support and strengthen families. Even as national progress has been stalled by a gridlocked Congress, many states have forged ahead—raising wages for low-paid workers, creating family-friendly work environments through paid leave policies, reducing barriers to employment and public assistance for families involved in the justice system, and connecting youth to high-quality work opportunities through apprenticeships, to name just a few examples.

But while policy can vastly improve lives, policy decisions can also shut the doors of opportunity or reverse families’ hard-earned gains altogether. In addition to commending states’ strides to combat poverty and to promote opportunity, this report also shines a light on recent actions by policymakers that may hinder or harm already-struggling families in their states.

Developments in the states over the past year—the good, the bad, and the ugly—demonstrate how far-reaching and consequential state-level policymaking can be. By taking a hard look at where their state is succeeding and where it is falling short, advocates, lawmakers, and residents can prioritize future action that would dramatically reduce poverty and increase well-being in their backyard and beyond.