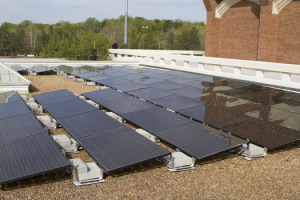 A new study finds Virginia’s commercial owners and occupants could realize tens of millions of dollars in annual savings on their electric bills by implementing the Clean Power Plan. (University of Richmond)

RICHMOND, Va. – A new study finds that if states implement the Clean Power Plan, energy savings would be greatest in retail and office buildings and total more than $11 billion a year nationwide in the commercial sector by 2030. The Obama administration’s plan is to cut carbon emissions from existing power plants by 32 percent by 2030. The Georgia Tech report said if Virginia follows through the annual savings for commercial owners and occupants could reach $182 million.
Report author, and professor at Georgia Tech’s School of Public Policy, Marilyn Brown, said one big way Virginia’s big buildings could save money is by using air-source heat pumps.

“This is a new generation,” she said. “These are super-efficient. They’re on the market, their return on investment is great. Right now they’re so new we’re not seeing a lot of them, but if by 2030 they were to take hold, as I think they’re going to, they would make a very big difference.”

Brown said the air-source method heats, cools, dehumidifies and manages ventilation, making it much more efficient than a traditional rooftop system. The report estimates that in addition to annual savings on electric bills of more than eight-percent, Virginia’s commercial buildings would reduce their natural gas bills by nearly ten percent.

“We know that they pay for themselves over the time, and sometimes actually a pretty rapid payback,” Beardsley said. “It still takes that initial effort to make a project happen.”

Beardsley points to creative financing options that would help homeowners and businesses defray upfront costs. The Clean Power Plan includes programs like that, including one which helps low-income residents.

According to the governor’s office, electrical generators account for approximately 30 percent of the state’s overall carbon emissions. Earlier this summer, Governor Terry McAuliffe signed an executive order aimed at expanding the state’s clean-energy efforts, a strategy Beardsley hopes will position the state for the future.

“To position for future efficiency and the economic benefits that come along with that,” she added.

“And that means that if a tenant wants to consider what the real cost of occupying a space in that building might be, it has some good sense of how efficient the office complex is,” Brown added. “It’s a way of making the market work more efficiently.”